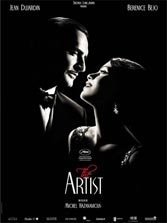 It’s 1927. Ever-smiling George Valentin (Jean Dujardin) is a hugely popular silent movie actor à la Rudolph Valentino who finds his beloved Hollywood vocation torn asunder by the sudden advent of talkies. His producer (John Goodman) wants “fresh meat” and “talking faces,” his scowling wife (Penelope Ann Miller) is incurably bored, and his career is headed for mothballs. His only devoted fans are driver Clifton (James Cromwell), a joyously loyal canine companion (in the tradition of Tintin’s fox terrier Milou), and wannabe actress Peppy Miller (Bérénice Bejo), whom he met by chance outside a theater at the height of his fame.

Crestfallen George, in an artistic pique of Latin pride, tries reviving himself by making his own silent movie. But the Depression intervenes to crush that dream. He drinks himself sad but never stops smiling. He’s ultimately rescued by Peppy, who has climbed to talkie stardom with his old studio. She also loves him.

French writer-director Michel Hazanavicius’s delicious black-and-white ode is without sound for all but a few moments, astounding in a time that revels in din and chatter. It painstakingly revives the foibles of a long-gone era by paying tender homage to George’s three stalwart traits, artistic stubbornness, human decency, and unbreakable class. It also creates and conveys a timeliness of setting, mood, place and people, the purest of movie pixie dust.

Hazanavicius, known for his spy parodies, clearly adores his material, a love conveyed by Dejardin and real-life wife Bejot, who together tell a perfectly speechless tale that fully supports George’s original distress at the loss of an art form that hitched narration to excited pantomime and swelling music. It’s an enchantment about a half-imagined America that only a rapt Frenchman could make.

NB: Lovers of Hazanavicius might have seen this coming. His 1993 French TV film “La Classe américaine” (“American Class”) pieced together slivers from some 50 old Warner Brothers’ films, including “Citizen Kane,” and dubbed in new dialogue.