The art of teaching 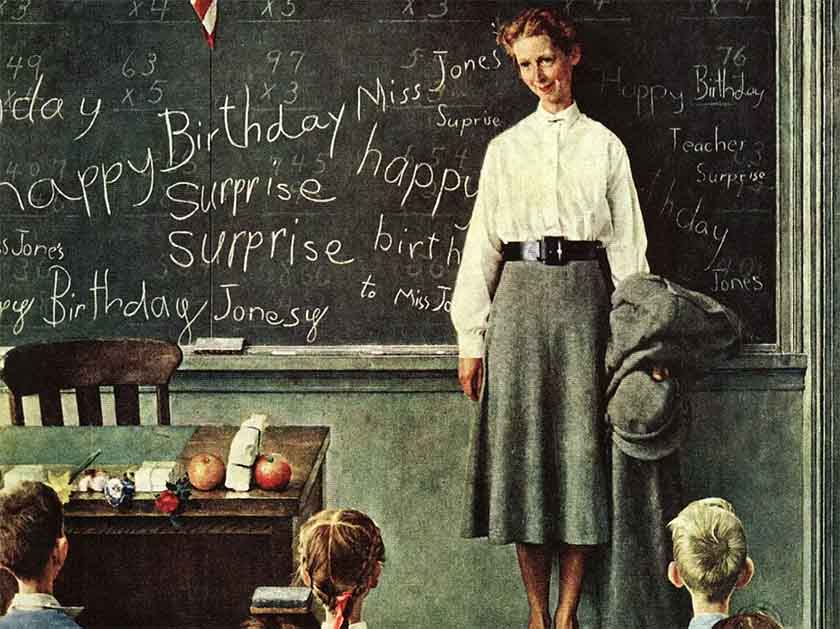 When it comes to teaching, things have changed a bit since the bucolic Norman Rockwell era.
I

never thought that I would end up teaching, certainly not based on my halting early efforts. The summer after tenth grade, I taught tennis to little kids. Though I was a Varsity tennis player, the kids came to realize I was actually terrified of swatted balls. My request that they gather up and return loose ones resulted in my being pelted.

My second teaching experience was likewise unpromising. During a college hiatus in Rome, I taught English to refugees in the cave-like basement of a medieval building whose poor acoustics drowned out my quiet voice. So I happily created another role for myself as a kind of reporter — I’d interview the students and write down their stories. 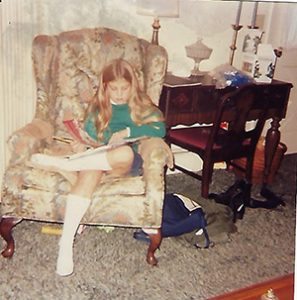 The columnist as a child, poring over her books.

But teaching has re-entered my life in the last several years. Having left full-time journalism behind, I wanted to find work that would support my writing life, as well as my infant daughter. When she was six months old, I got my first gig, teaching intermediate Italian language to college students. I was delighted to be immersed in Italian again, but commandeering the class was a challenge for one reason: I was teaching a class that I had never actually taken. I had initially learned Italian from the refugees I’d been charged to teach years before. My subsequent education came in the form of daily living in Italy, and falling in love with an Italian.

So when students asked me how such-and-such grammar points worked, I wanted to say, “It’s just that way,” or “Can’t you just hear it?” After all, Italian is, thankfully for aspiring speakers, a phonetic language — meaning you say it as it’s written. And Italians are also very forgiving when foreigners make mistakes.

My teaching authority that semester eventually came from my Italian stories — random vignettes about learning the language that involved some sort of lesson. Like the time that I announced, “Voglio cacare,” to my roommates in Bologna, and they blushed and began giggling, pointing to the bathroom. I’d just said that I wanted to poop. When what I’d meant to say was, “Voglio chiacchierare.” I want to chat. Mind your syllables, I told the students.

My Italian teaching experience then morphed into teaching various types of storytelling courses, where I’m satisfied to be placed. When asked about what I like about teaching, I go back to what I love about learning, since the two are twined for me.

I like the conversation of the classroom — the possibilities to wonder out loud and exchange and advance knowledge and insight, and of course, stories. This has been true for me ever since my earliest Catholic school days, where I remember little of the content of Catechism, but I do have an image in mind of the disciples sitting around discussing things. This was immensely comforting to me, the only image from my child’s Bible that stuck.

I learned early that learning was a possible way out of existential gloom, and a way into the life of the mind.

Growing up in a university town also helped. I learned early that learning was a possible way out of existential gloom, and a way into the life of the mind. Last fall, I came full circle when I took a writing pedagogy class back in my hometown, with a teacher who has been there for decades. In her seventies, she called herself the quintessential Jewish mother, and a professional parent. She dispensed hugs in the classroom, rose at 5 a.m. to bake fresh bread and make coffee for every class, and cared about her students. “Tell me what’s going on in your lives,” she’d say, adding, “The only thing I don’t want to know is who you are sleeping with.”

After the giggles subsided, we shared openly about our lives and our classrooms. It was a safe space that I’ve tried to mimic back in Florida—to a degree. While it would not behoove me to mention sex lives to undergraduates, and I have yet to rise at 5 a.m. to bake bread (although I will occasionally rise to write at that hour, practicing what I preach to my students) — I sometimes feel like the students’ Italianized mother figure.

“Love what you do, but don’t expect it to always love you back. You have to work at it,” I can hear myself saying — over shots of bittersweet espresso and biscotti guaranteed to keep the conversation amongst us alive.