The art of seeing 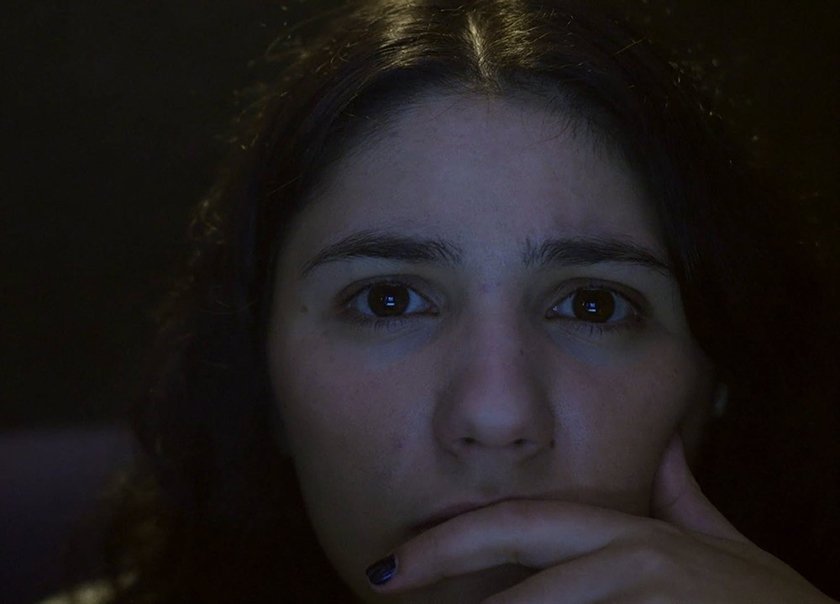 Maia, viewing footage of Palestinian life and juggling her beliefs.
A

t the beginning of “Viewing Booth,” the 2019 documentary by acclaimed filmmaker Ra’anan Alexandrowicz, there’s a reference made to author Virginia Woolf’s rejection of the word “we” when asked how “we” might prevent war. She found the use of the pronoun ambiguous.  Who or what is “we”? Who are the citizens of the “we” that’s being spoken for? Like Woolf, Alexandrowicz refuses to take the “we” for granted. He’s not content to let ambiguity slide and his 75-minute film represents an attempt to study and clarify such ambiguities. As a filmmaker himself, he tries to parse assumptions about a movie’s subject, its filmmakers, and even its audiences.

Unlike other documentaries in what some view as the genre’s golden age, the merit of “The Viewing Booth” is not in how it dazzles viewers, but in how it probes and questions the genre itself.

I recently had a chance to interview Alexandrowicz over the phone. Alexandrowicz sounds more like a teacher or philosopher than a filmmaker. His responses attest to well-thought-out concepts. And it seems, when you’re listening to him, that he is appreciative of this chance to talk things out, perhaps in the hope that some idea not yet discerned may be teased out. For him, experience is more about what is happening in the present, than what has happened.

The merit of “The Viewing Booth” is not in how it dazzles viewers, but in how it probes and questions the genre itself.

Born and raised in Israel, Alexandrowicz has been making films since attending Jerusalem’s Sam Spiegel Film and Television School. Though he’s long been interested in issues surrounding the Israeli occupation, he has come to recognize that the reality of the situation is not to be found solely in the realm of history and politics, and that there are many other perspectives worth exploring. “There is a world of thoughts that exists within each viewer that can teach us a lot about the media environment.”

Several years before filming “The Viewing Booth,” he performed a number of filming experiments, or “etudes” as he calls them, by recording people talking in cinemas, homes, and media outlets. He knew he was interested in how people viewed the Israeli occupation from a distance and what meaning they give to videos, and saw value in “turning the camera around, from reality towards the viewer, and asking ourselves what is the role of the viewer in all this.”

In 2017, he recruited eight Temple University students to participate in a project involving observer responses to select media. For six months he recorded their observations and reactions to videos of West Bank life. But after closely reviewing one of the participants, Maia, a Jewish American who happened by the studio after the study began, he decided to call her back in because the authenticity of her responses made her distinct from the others. What resulted formed the film’s center.

Alexandrowicz knew Maia was the perfect choice not only because, as we observe in the film, she sees the videos differently than he does. It’s also because she earnestly negotiates the images and personally reflects on them, and on the “mechanisms” she uses to do so. Moreover, she fearlessly challenges her own sense of reality.

The director elucidated that despite the diverse ways in which we perceive the differences between fiction and nonfiction footage, we try to transpose or push away what he calls “fictionalized nonfiction.”

“Maybe when we see something that’s uncomfortable for us, we try to look for the fiction element, try to see why the production of it maybe, or the frame of it, maybe renders it not so real for us.”

One of the strengths of the film is Alexandrowicz’s self-restraint, in that he doesn’t jump in. His said his job was to listen, regardless of his personal position. He believes that some things need to be seen, and even though it was difficult, that’s what he was there to do. “It calls for a very different cinema. It’s a very different power relation between myself and the subject, and a very different responsibility.”

“It doesn’t end with a period or an exclamation mark, it ends with either a question mark or an ellipsis.”

Though the film isn’t intended to be didactic about the occupation itself, you still get the sense that this film is a very personal one for Alexandrowicz. “Another filmmaker would have had an entirely different film because different questions would be asked,” he stated. “The film finally is the result of what images we were looking into, who Maia is, and who I am.”

And to be sure, “The Viewing Booth” is not about forcing a belief system on the viewer. “It doesn’t end with a period or an exclamation mark, it ends with either a question mark or an ellipsis.” Anything else more persuasive, more biased, would be a “squandering of that resource.”

Alexandrowicz’s experience with Maia reveals that “apart from breaking down the inherent mistrust we have in the media environment, or the growing mistrust, we need to create space and time to think about things in order to be able to maybe learn things, maybe change our minds.”

Likely Woolf would agree that we ought to make the space and take the time to learn. To be sure, the Viewing Booth inspires us to do just that.

The film is available for viewing online at theviewingboothfilm.com. Alexandrowicz’s other films include “Martin” (1999), “The Inner Tour” (2001), and a fictional work entitled “James’ Journey to Jerusalem” (2003). “The Law in These Parts” (2011), a documentary spotlighting Israeli military influence over parts of the country’s court system, won the Grand Jury Prize at Sundance.