The art of conversating 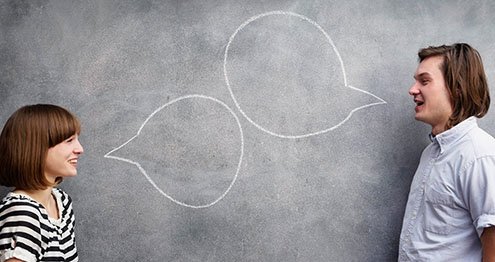 Listening allowed me to witness the intricacies of the mind of the person before me.
I

recently had a few really good conversations that have made me want to spend some time analyzing what happens when two people exchange ideas.

Bear with me while I explore the topic.

In broad terms, a conversation involves a presentation of ideas or a series of thoughts, followed by a give and take. A debate. Two people suss each other out, acknowledge alternate opinions, and maybe form new ones. One person can dominate a conversation; it would be naïve to presume that we’re all always on even footing. But under the best circumstances, two people engaged in dialogue can propel each other into a new, truer space.

When I taught at a New York City public school, my students would use the verb “to conversate.” They figured that if you were having a conversation, you were conversating. It’s a neologism that carries with it the delightful tangle of real conversation.

But there’s another commonplace neologism, and it’s the antithesis of conversating. Mansplaining describes the tendency of men to talk at you instead of with you. Mansplainers feel they have a strong understanding of a particular situation — and that you do not. They interrupt you to try and put you in your place. Mainsplainers don’t care about the exchange itself. They need to assert themselves by using what they consider their intellect. It is an act of aggression that’s often demeaning.

I’ve met many men who like to explain things in a pedantic manner. They can be teachers, bosses, priests, friends, television personalities, politicians, colleagues, or even your husband. Under the illusion that they’re experts, these are men who like what they have to say on a variety of subjects. In Italy, this kind of male figure is rampant.

Why? My own guess is that the prevalence of mansplaining in Italy is tied to the country’s educational system. At school, verbal sophistication is praised (exams are still often oral) and teachers regularly interrupt students, deriding them before relaying the information in the “right” way. High school students “repeat” out loud to study. At some university exam sessions, young adults attempt to explain notions while professors on exam panels actually chat with each other. A good grade can mean you succeeded in speaking about a subject in a convincing and conclusive way. Mansplaining it Italy gets transformed into its more popular form of mò ti spiego, or “let me tell you how things really are.” What I call mòtispieghismo invades every aspect of society.

But in fairness to men, how a man explains certain things can be wonderful.

I think back to my father and how he would take the time to unpack concepts and practices to me.

These rules for living were often accompanied through joint activities. Together we’d change an electrical plug, grout tiles, or prepare a leg of lamb for a special dinner. Often his lectures triggered a series of questions. But mainly I was left with a gentle memory of being introduced to the world via a real expert.

These conversations with my father shaped my way of doing things and my worldview. They made me feel able, capable, eager to fend for myself, test those practices, and even construct my own method for doing things. Simultaneously, they made me into a good listener. Watch, listen, observe, learn. Listening is important because, first and foremost, it helps you steer clear of mansplainers.

Thinking back to the recent conversations that generated this essay, listening allowed me to witness the intricacies of the mind of the person before me. I listened as he made connections, divulged details, and digressed. As I listened, I processed his thoughts, reflected on my own, uttered them, and discovered new ones. It was much more than a simple back and forth. Thoughts, like wet paint, were spattered onto a canvas: they held together, coalesced, and somehow formed a new and expressionistic whole.