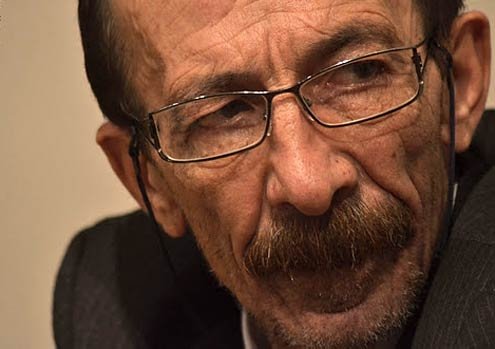 Pino Maniaci, who bought a local network in 1999 and has targeted the Mafia ever since.
P

artinico is small city of about 30,000 people with a disproportionately high number of churches and countless bakeries. It is located about an hour away from Corleone, the traditional center of the Sicilian Mafia. About 30 minutes off is Cinisi, where anti-Mafia activist Peppino Impastato was shot dead in 1978, and less than 15 minutes away is the spot where anti-Mafia prosecutor Giovanni Falcone, his wife, and three bodyguards were assassinated in a 1992 bomb blast.

These days, though, the three small Sicilian cities appear far quieter than they were two decades ago. On the face of it, the bad old days of bombs and automatic weapons are gone. Except that in many respects they’re not.

According to locals, the Mafia, sensitive to changing times, has just changed color. The 21st-century underworld wears a collective white collar.

While the old school Mafia spent decades camped out in Sicily, it now pays far greater attention to criminal enterprises in northern Italy and the United States. It has less time for Corleone but all the time in the world for Eastern Europe. Its top lieutenants worry less about making money off local agriculture and provincial bribery and more about worming their way into the corridors of global politics. Its bosses spend less time smoking in dark rooms than ensuring the lucrative global flow of hashish, marijuana, and cocaine.

But that doesn’t mean the Mafia has abandoned its roots.

One look at Partinico’s main square, where old men read the local paper while slowly sipping their espresso and the smell of freshly baked cornetti fills the air, belies the fact that just down the road from Partinico is a major drug trafficking center. The difference is that these days the Mafia presents itself more cleanly, more politely, more insidiously, minus the high profile assassinations that put it on a collision course with Italian authorities that peaked in the 1980s and 1990s.

Since those rowdy days, Mafia headlines have largely receded from the news, replaced by a national emphasis on immigration, on terrorism, on the faltering economy, all of which ironically also have underworld ties. Most Sicilian cities hardly mention the Mafia, which flourishes below radar.

But Partinico is an exception.

Since 1999, Pino Maniaci and his family, who own and run a local TV station called Telejato, have doggedly dedicated themselves to producing what is — at two hours — probably the world’s longest daily news show, all of it live. When businessman Maniaci took over the faltering station, then owned by the hardcore wing of the Italian Communist Party, he vowed he’d use it as a platform to confront the Mafia head-on. Passionately true to his word, he has caused problems for the likes of Mafia chieftain Bernardo Provenanzo (arrested near Corleone in 2006, with Maniaci getting the scoop). He has also gone after smaller Mafia misdeeds, often naming names. As a result, Maniaci has had his car burned, received death threats, and even gone on the air after being beaten up by thugs.

Some locals label Maniaci and Telejato as sensationalist (which has some truth), others dismiss them as a symbolic local anti-Mafia effort, while some just laugh the effort off as a kind of daily cabaret.

But one thing’s for sure: Nobody, from the mayor to the baker to Mafia bosses, ever misses a broadcast.

Every day, Telejato digs under the hangnails of a small city. The difference is that Partinico and the mafia are inextricably linked. The station, which has an estimated reach of 180,000 people in 25 local communities, makes it a point to report on drug-related incidents, suspicious car arsons (a typical underworld threat), and the uncollected garbage accumulating on side streets. Often the crimes and misdemeanors have no known culprits. But when they do, with or without mafia links, Maniaci has no hesitation about making them public, unusual in a place known for deference and whispers.

Partinico’s copious graffiti is often directed specifically at Maniaci. There’s “Pino, we’re with you,””Pino Maniaci, you screwed Partinico,” and “Pino you must die.” Telejato is so vital to Partinico’s day-to-day life that whatever it does provokes strong reactions, both anger and admiration.

That’s because Maniaci knows no halfway measures. He is a man in constant attack mode. Local Mafiosi are not culprits or lowlifes but “pieces of shit.” Political parties are not inefficient or corrupt, but “full of idiots and ass-leakers. “[An expression for hypocrites who praise the powerful to get favors]. Sicily doesn’t suffer from environmental woes but is “buried in excrement.”

His impassioned “journalism” may seem to outsiders as inappropriate, inaccurate, simplistic and populist. Indeed, it often is. Half of the news items he broadcasts nightly are literally copied from that day’s daily newspapers. Video commentary is often recorded hastily, without requisite fact checking. The sincerity of those interviewed by station interviews (and the allegations they make) is taken for granted. In 2010, a reporter for the Smithsonian magazine, in the area to write about the Mafia, said of Maniaci: “[He] often asks visiting foreign reporters to join him on camera in the belief the appearances will showcase his international clout and thereby protect him from further Mafia attacks.”

“We are a little fire that we hope will become a big fire,” Maniaci was quoted as saying.

So much showmanship can be irritating to say the least. At the same time it requires context to fully understand. Maniaci is a man angry at perceived social injustices and eager to make others feel the same way. He blames the underworld for region’s rampant illegality and sees himself first and foremost as a champion of Partinico’s honest, but silent majority, people who are at the same time the creators of and the victims of so-called omertà, an untranslatable Italian word those who keep their mouths shut out of fear, habit, social pressure and a desire to conform).

He wants his viewers to stop falling back on the stock phrase, “That’s how it works in Sicily,” and take greater responsibility for the reality around them, even if it means getting involved in changing it. Every day he shouts, insults, and provokes in an effort to get people to break their silence and speak out.

Take the latest round of graffiti to appear on the white marble of the central fountain in Partinico. Its no-nonsense tone — “Pay up, you bastards.” — was intended to cow local shopkeepers and small entrepreneurs who had stopped paying the pizzo (protection money “owed” to local Mafio in exchange for smooth sailing.) But the fact that some had stopped paying was a triumph in its own tight. Pressure from anti-mafia NGOs, the weight of Italy’s national economic crisis, and a widening sense that the Mafia was longer invulnerable finally led some local business owners to take a stand, once considered an unthinkable heresy.

At first, the consequences were limited to the graffiti. But they soon turned more personal, including arson and more direct physical threats, including businessmen being followed and mugged.

Still, something is changing, albeit at a snail’s pace. Only minutes after Telejato first announced the presence of the graffiti on the fountain, a Partinico councilman called the station newsroom to promise it would be swiftly removed. The next day the fountain marble was polished clean.

Washing away graffiti doesn’t washing away the Mafia, of course, but it does have symbolic meaning. It suggests that for the first time threats stated aloud are actually being heard, and that making them might have consequences. Intimidation is now televised. At least it is in Partinico, where Telejato shouts about it daily.

— The author is an Italian student studying law and anthropology at University College Utrecht in the Netherlands. She spent a month-long internship at Telejato in January.