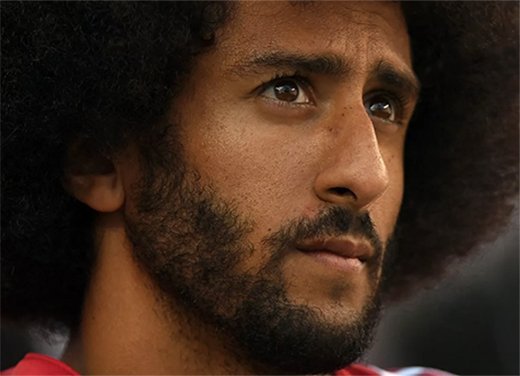 Since beginning his protest against racial injustice in 2016 by refusing to stand for the national anthem, quarterback Colin Kaepernick has been all but ostracized by the National Football League.
A

merican author Ray Bradbury’s “The Anthem Sprinters” is a short story published in 1963. It is not science fiction, his usual genre, but rather a slice of life story set in Ireland of the 1950s. Bradbury had lived there for some months while writing a screenplay for Hollywood director John Huston.

In Dublin at the time, it was mandatory to play the Irish national anthem in cinemas after the end of a film. The sprinters of the title were certain attendees who chafed in good Irish fashion against this compulsory display of patriotism. Being forced to stand about and listen to the anthem was, for them, an intolerable trammeling of their freedom of movement, as they had to wait until the anthem played out before leaving. To them, this was a waste of time that might be better spent lifting a Guinness or three.

So, these rebels adopted the counter-strategy of making a mad dash up the aisles of the theater and out the door in the critical seconds between the close of the curtain and the beginning of the anthem. It was simultaneously an athletic contest and a statement of conscience. The last man across the finish line bought the first round.

I like this attitude. We need more of it. If a sport as ridiculous as curling can qualify as an Olympic event, why not some Monty-Python-esque version of anthem sprinting? Choreographed perhaps by each country’s Ministry of Silly Walks.

In a similar vein, in grammar school of the 1950s, we were all forced to stand and recite the American Pledge of Allegiance at the start of each school day.

The United States Supreme Court had struck down laws compelling the Pledge in 1943, but long after that students continued to be harassed, shamed, berated, and expelled for refusing to stand up while it was being spoken. As recently as 2017, a 17-year-old senior was expelled from a Houston school for this “offense.”

Many a memoir by those brought up in communist households (so-called “red-diaper babies”) note the struggle to fit in with other children while at the same time trying to evade the Pledge ritual. Some children stood silent, others tried to sit as inconspicuously as possible, and a few mumbled something unprintable in place of the required verbiage.

Like the “troublemaking” civil rights marchers of the 1960s, and the two U.S. Olympic sprinters who raised black-gloved fists during the playing of the national anthem during the 1968 Olympics, Kaepernick is insisting his country does not live up to its democratic ideals.

My own communist parents never made a fuss about it. They thought that a mandatory pledge had the same validity as a confession extracted under police torture. It would never stand up in court. I think I stood silent, but don’t really remember. Maybe I just crossed my fingers behind my back.

All this comes to mind considering the punishment dealt to quarterback Colin Kaepernick for his refusal to stand for the Star-Spangled Banner, traditionally sung before every National Football League game. I don’t consider Kaepernick the greatest quarterback ever — he takes an eternity to wind up and pass — but he did lead the San Francisco 49ers to the 2013 Super Bowl. Plenty of mediocre quarterbacks are gainfully employed, warming the bench. But quality of play isn’t the reason no one wants Kaepernick, who has not played since 2017.

It’s all about what’s perceived as his disrespect. But Kaepernick, who began his protest to draw attention to racial injustice, sees things very differently. “I’m going to continue to stand with the people that are being oppressed,” he says. “To me, this is something that has to change. When there’s significant change and I feel that flag represents what it’s supposed to represent, and this country is representing people the way that it’s supposed to, I’ll stand… I’m seeing things happen to people that don’t have a voice, people that don’t have a platform to talk and have their voices heard, and effect change. So I’m in the position where I can do that and I’m going to do that for people that can’t.”

Like the “troublemaking” civil rights marchers of the 1960s, and the two U.S. Olympic sprinters who raised black-gloved fists during the playing of the national anthem during the 1968 Olympics, Kaepernick is insisting his country does not live up to its democratic ideals.

I suspect there are many people out there who, like Kaepernick, place concern for American national character ahead of involuntary pledges.

Civil rights activists were harassed by the FBI, spit on by racists, and even murdered for their effrontery. I once had stones thrown my way for being a n*****lover. I was told to go back to Russia.

So far, Kaepernick has only been slandered and implicitly banned: no team will sign him. In the face of this, he’s responded honorably. Kaepernick’s patriotism took the form of a spontaneous and personal act, which I think is as it should be.

In line with that idea, here is a modest proposal:

Let’s all honor America by playing the national anthem after the game, not before. That way we can be sure those who stand for it, instead of sprinting for the exits, are truly doing so out of nationalistic devotion.

As I recall, the insurgents in Bradbury’s story are ultimately pinned to their seats by a higher power, as it were, weeping at the glorious voice of Deanna Durbin at the end of the movie. There’s lots to love in that.