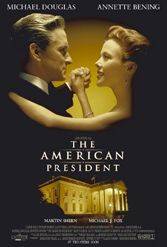 How’s he do it? For starters, the president’s foil is chief-of-staff is A.J. McInerney, played by… Martin Sheen. And who wrote the movie? Aaron Sorkin. The same Sorkin whose next project, TV’s “The West Wing,” promoted Sheen to Shepherd’s spot. No wonder Reiner’s planets aligned.

Richard Dreyfuss is delicious as a senator who’d like to make the romance into an undoing. Douglas is, well, Douglas — peddling that boyish smile. This is unadulterated fantasy for adults who can suspend cynicism long enough to re-imagine liberalism and style holding hands in the back seat. Now, on to Barack.