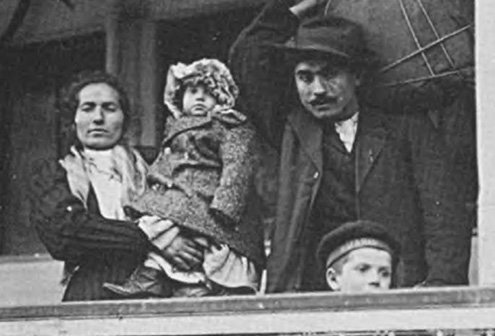 Italian immigrants: Not all such brava gente.
I

t’s dangerous dinner party season again. It happens any time that a U.S. story is the headliner. Some Italian fellow guest asks you what, as an American, you think about the current big news item — Iraq, Columbine, November’s election outcome. So you tell them. And then they tell you not only what they know — as an objective Italian — but also that you are wrong.

It may not end in tears, but certainly ends in shouting.

I have an Italian friend with whom I share an interest in esoteric books on psychology and spiritual topics. American ones, he complains, are too “manualistic”; too practical and schematic.

No doubt they are, but a “manual” I recently read may have just the manualistic tips capable of transforming dangerous dinner parties into social cake walks. “Difficult Conversations,” it is called; “Your boss, your spouse, your kids, your friends, your clients, how to discuss what matters most.” Concise, intelligent and simple, the authors from Harvard’s Negotiation Project break hard conversations down into types and offer precise techniques for defusing tense discussion.

Two matters are of interest here.

The first is what’s called “Identity Conversation,” a subliminal dialogue about what a conversation itself means about the values, competence or even worthiness of love of those engaged in it. This hidden conversation, highly emotional, is what can push polite dinner table banter into gesticulation and shouting.

Our American identity is a unique fusion of the personal and political. In what other country do our own and our ancestor’s own personal revolutions — packing up, crossing oceans and starting new lives — correspond so closely and emotionally to national founding-myths and realities?

It is this close connection that gives even a banal conversation about American practices or policies an explosive emotional charge. Understanding the feelings behind the “identity conversation’s” role may also help to understand what your Italian interlocutor may have at stake too; all his own country’s historic complexes of superiority and inferiority, its mix of admiration, suspicion.

Keep this in mind and you may do better the next time an Italian asks your opinion. You may even find you’ve taught someone and perhaps even found a new friend.

The second useful item is the “‘yes and’ technique.” This technique allows you to acknowledge a different point of view and also express yours without conceding anything. It recognizes that there are many truths and not all of them conflict.

The following “yes and…” responses should stand you in good stead, no matter what the conversational occasion.

Yes, America is a very young country and, founded in 1776, is almost a century older than Italy, which was founded in 1861.

Yes, America is an artificial nation and the Founding Fathers modeled it on Periclean Athens.

Yes, you know America well, having seen lots of films, and did you know that many New York movies are shot in Toronto?

Yes, of course you know America well, having visited California and New York, and have you also visited the other 48 states?

Yes, we too have corruption and it is taken care of quickly. In the Watergate scandal, trials and convictions of perpetrators lasted two years from the June 1972 break-in to Richard Nixon’s resignation in August 1974.

Yes, America is a racist country and that’s why it oversaw the birth of the civil rights movement and Affirmative Action.

Yes, America has the world’s highest rates of gun ownership and is 24th in worldwide homicide rates. Brazil’s rate is four times higher.

Yes, America can be a Puritan country, and when deeds do not live up to words — called hypocrisy — hypocrites such as Eliot Spitzer resign.

Yes, American society has extremes of wealth and poverty and the World Bank says Americans have the world’s highest rate of charitable giving; 1.7 percent of GDP and the closest behind is the U.K. with .73 percent. Italy is unranked.

Yes, many Italians did immigrate to America and according to Italian journalist Gian Antonio Stella, author of “L’orda. Quando gli albanesi eravamo noi,” many were not at all brava gente.

Yes, that pasta over there does look good, and if you don’t mind I’m going to help myself to some. It was lovely talking to you.