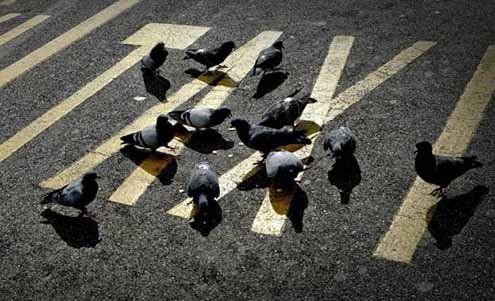 Rome cabs came to a standstill in February to protest the rise of Uber.
I

f you don’t have a car and you’re putt off by public transportation, cabs are a great alternative — at least in most of the world. Flag one down and it’ll take you wherever you need to go for a decent price. You might even get in a little banter along the way.

Not in Rome. Let me rephrase that: it could be that way in Rome if the city’s cabs didn’t occupy a kind of grey zone. Cab prices can be high. Drivers are sometimes combative, as if they’re ferrying you around while also locked in a holy war.

Their most recent campaign ended last month, but not before they went on strike for a week. Why? Hate is a four-letter word: Uber. What exactly does Uber represent that would trigger such hostility? An unregulated alternative to cabs in a country where the notion of competition still hurts. What does Italian Uber have to offer? Usually a black limo, an attentive driver, and prices within market rates. Everyone in North America knows Uber. It’s part of daily language. Not in Italy.

IThe other day I was headed back to my office after having zigzagged through the capital. Since the on-strike cabs had parked their cars near parliament, I turned to Uber. “Miss,” said my driver calmly, “I’ll have to take a slightly longer route. I can’t risk driving too close to parliament buildings. I don’t want us to get attacked.”

Later, at the Rome apartment I share with Laura, the two of us chatted about the absurdity of needing to resort to violence to defend your rights. It’s a bit like thinking you can bring crime to a standstill by imposing the death penalty.

But my interest the day’s events didn’t quite match Laura’s interest in talking about her lover Franco. Laura’s single. She’s also smitten with a “Pretty Woman”-style notion of romantic love. Her Franco met Laura by chance. After which she fell hard. Never mind that Franco was still living with his girlfriend of 10 years.

“I asked him if he was happy with her,” she told me. “Do you know what he said?”

I told her I had no idea and lit a cigarette.

“He said that he was. He told me straight out that he was happy with her. How’s that even possible? He’s in my life because when he’s with me he feels things he’s never felt with her. But no, he’s not in love with me. I’m the ‘other’ woman, the alternative. I don’t even think he’s in love with her. But he hasn’t picked me and I doubt he ever will.”

After this, Laura just stared out into space.

So I spoke up. “He’s in love with you but he can’t admit it. If he did, his world would come apart.”

Laura now looked at me as if I’d just told her the location of the Holy Grail.

Then came the question any woman in any city in any state on any planet feels compelled to ask a female friend. It’s not a question you want to hear, because you know you can’t really answer it.

“What do you think I should do?”

I distractedly flipped through the pages of the novel I was reading before looking up.

Laura’s expression spoke for itself, nestled somewhere between “you’re not serious” and “you’re probably right.”

“Leave,” I repeated. “So far you’ve been omnipresent. You’ve given him everything. You’ve been the perfect woman. Make him feel he misses you. Help him understand if it’s really you he wants or if you’re just a sideshow.”

She nodded. “Listen, do me a favor: write about my situation, ok? That way you can help out everyone else in this kind of situation. Let all the ‘other’ women know they’re not alone! I feel their pain, dammit!” We laughed, and I thought to myself, why not? Why not write about her?

I have no idea if I gave her the right advice. Honestly, I just didn’t know what to say. It’s hard enough to get people in a relationship to see eye-to-eye let alone playing Cupid in any sensible way.

I’d been so taken up by Laura that I’d lost track of my own love life. That night I met up with Giorgio. Seeing him made me happy. We were finally learning to relax. Our intimacy had deepened. I could feel it when we made love. I liked him. A lot.

Laura talked about Franco as if he was a kindred flame. Not a spirit but a flame. She said the passion she felt went well beyond the normal. The two of them, she said, were like souls reincarnated into separate bodies that had finally found each other.

Maybe that’s true, but when I wonder does passion — even just basic physical contact with another human being — have anything do to with the word “normal?”

I’m bothered if my mother gets too physically close to me, even just to show affection. Anyone else, forget it. There’s nothing normal about desire, about wanting someone always and no matter what.

Yet that’s how I was beginng to feel about Giorgio. Months had passed but there had been no change, no dip. Not seeing him for weeks hadn’t changed how much I craved his closeness.

Even on days when he wasn’t around and I felt down, when everything seemed so complicated, I knew I could be myself with him. I had nothing to fear. His patience in me was genuine. Mine in him was rare.

Sometimes we argued, of course. But we never relaxed from each other. It wasn’t in our makeup. We’d maybe scowl for a few hours but in the end it passed.

I knew the alternative in his absence: that I’d lock myself away in a state of pretend normalcy, which I’ve done before and never want to do again. Instead, I’d tapped into a strange underground glow, incandescent like lava. What I’d found was the alternative to everything I’d left behind.

When the Rome protest ended, I hopped a cab. I’m usually talkative. Not that day. I just contemplated the sunny capital in my own quiet way.

Traffic was heavy. The cabbie caught a glimpse of me in the rearview mirror. “It’s completely crazy to say this, I know, but it’s beautiful, Rome. Right?”