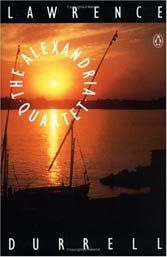 Yes, lovemaking here is not sex but coitus, tame stuff in a 21st century of hard-knocks fucking, but Durrell — an anti-minimalist — was all about “the light and music of language,” as critic George Steiner put it.

His tactile sentences lurk in back streets, kissing away. In “Justine”: “To stand lightly there, our little fingers linked, drinking in the camphor-scented afternoon…”; in “Cleo”: A sky composed of “palpitating velours which was cut into by the stark flare of a thousand electric light bulbs. It lay over Tatwig Street, that night, like a velvet rind.”

Durrell’s grand Mediterranean view is as vibrant to some as it is overwrought to others. But how do you learn from countries you own without implanting them in your mind’s eye?