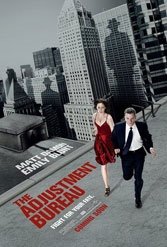 Take love-conquers-all romance and flavor it with Philip K. Dick futuristic noir and you still you get a love story, albeit 2.0-style. That’s not to say director George Nolfi’s tale of fate vs. free doesn’t have its moments. It certainly does. Thanks to fine good chemistry between its leads, Matt Damon as a political wunderkind, and Alice Blunt as the British modern dancer he falls for, it plays like a Robert Capra feel-good movie transported into one of Dick’s make-believe centuries (though Dick’s original story — “Adjustment Team” — put Cold War worries ahead of sentimentalism).

Damon is Jack Kennedy-like New York congressman David Norris, who finally overplays his hackneyed political hand and loses badly. But when he stumbles on Elise in the men’s room (yes), he’s dumbstruck, and so is she. Enter the Dick factor, namely the thought police, or in this case the Adjustment Bureau, the deity’s hat-wearing feds, an earth-roaming task force charge of assuring existence goes according to Judeo-Christian plan, one which secular humans seem regularly to main. And according to that plan David and Elise aren’t in the circuitry. Vex them and you get “reset,” read lobotomized.

What follows is a flavorful combination of action thriller, sci-fi caper and love story. Norris will stop at nothing, literally, to make fate (and Elise) bend to his loving will, something “The Chairman’s” feds have to reckon with as best they can. Damon proves again that he can play straight, soft, hard or maudlin, all of it with Henry Fonda charm. Blunt shines as his fascinated if bewildered foil.

Credit Nolfi for deft handling of the details. Anthony Mackie (Harry) and John Slattery (Richardson), the two most involved adjusters, are appropriately laconic, and ironic. Terrance Stamp as Thompson, The Chairman’s top emissary does what only Stamp can do: Be a good bad guy, and vice versa. Love conquers all, of course, but getting there is entertaining enough, despite the forced injection of theological drum-beating that muddles or annoys, often both.