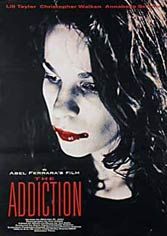 Among the most terrifying, intelligent, outrageous, and eccentric vampire movies on record. Lili Taylor is New York anthropology grad student Kathleen Conklin. In a nutshell, she’s bitten by vampy vampire Casanova (Annabella Sciorra) and her life, intellectually-propelled, veers into the netherworld of blood lust.

Christopher Walken, mixing gags and snarls, does his thing as elder statesman vamp, but it’s Taylor, by turn bewildered, exhausted, and insatiable who steals the show. This is as much a tract about guilt, mass murder, and sexual desire as it is a camp treatise on vampires.