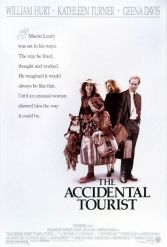 Director Lawrence Kasden sprinkles bittersweet humor on Anne Tyler’s popular novel and emerges with a gem. Idiosyncratic travel writer Malcolm Leary (William Hurt) is depressed and emotionally crippled after the death of his son. His wife Sarah (Kathleen Turner) leaves him and he moves in with his sister Rose. He then meets dog-trainer and single-mother Muriel Pritchett (Geena Davis).

Prichett makes it her self-appointed role to revive the impassive Leary, which she does by refusing to accept the ordinariness of daily life and demanding he do the same. A study in grief is turned into a tricky love story. Though Leary is literally leery, the incandescent Muriel prefers action to insinuation.

Funny and touching, the film stops well short of outright comedy. There’s just too much debris. Hurt and Davis, both in their prime, are great to watch (Davis won a best supporting actress Oscar). So is the rest of the Leary family, with its own set of problems.