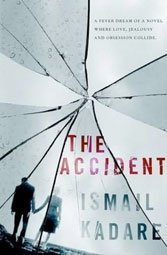 Kadare’s novel gallops into life. A car accident. Whispering lovers. Secret services. Implications of war crimes. He shakes and stirs his easily-tipsy Balkans into an alluring cocktail. After that, alas, metaphysics step in, and woe betide a thriller forced to slow down to include Cervantes and heavy-handed Greek legend.

Council of Europe bureaucrat Besfort Y. and his longtime companion Rovena St., both Albanian, are killed when their cab flips over on the rainy autobahn near Vienna. The cab driver survives but remembers only that he lost control when he saw the couple “trying to kiss.” Trying? Albanian and Serbian intelligence seek cloak-and-dagger explanations but eventually surrender the field to a dogged investigator who meticulously reconstructs what turns out to be an otherworldly love affair.

Longtime lovers Besfort and Rovena are intriguingly portrayed as ineffable mystics who worship one another, a cult of two, or perhaps three. Besfort doesn’t want a bride but an ex-wife. Or a whore. Or a “new kind of love” that flirts with the abyss. Moth-to-flame Rovena resigns herself to being “…sometimes a slave and sometimes a queen.” The couple meets and makes love in hotel rooms across the continent, with the feverish researcher transforming their encounters into dream sequences.

So, was the accident a plot? What did the cabbie really see? If Besfort is Orpheus to Rovena Eurydice, are we really in Europe or in a legend of the lovers’, or the researcher’s, making? No answers. Kadare’s initially clever marriage of detective fiction and spy book passion is sacrificed instead to the ethereal. Absent irony or the absurd, the thriller fades into a milky cataract from which the characters drain away.