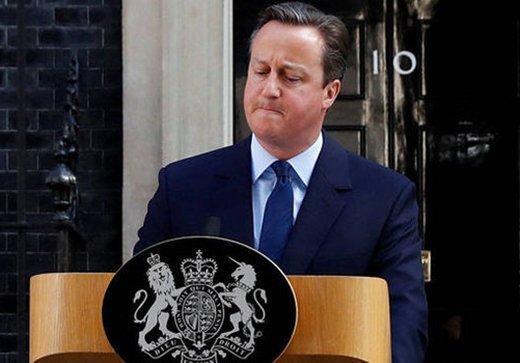 Tory Prime Minister David Cameron staked his career on Brexit's rejection, and lost, in part because the London side of Britain failed to take the 2016 referendum seriously enough.
N

ot all results are created equal. Aspects of politics and sports suggest the way victory is arrived at and how its margin sways behavior after crucial outcomes.

Impeaching an American president requires approval from two-thirds of both houses of Congress to avoid the rigid partisanship that has recently become the U.S. norm.

In most rounds of Britain’s elite F.A. Cup, its top domestic soccer competition, opposing teams that play to a draw must play a second game, with overtime and penalty kicks if necessary. The replay is intended to ensure an undisputed winner, but without undue haste.

In each case, the underlying intention is to allow for reflection and diminish any shadow of doubt.

Decision-making is accorded an an order of importance that emphasizes the clarity of a victory.

There is regrettably little such clarity when it comes to national referendums, uniformly decided by one-time simple majority without regard for the weight of the proposal at hand.

As egalitarian as such verdicts can sound, they often reflect an emotional and risky rush to judgment, as the British exit from the European Union (and its bitter aftermath) demonstrates all too obviously.

The June 2016 Brexit tally was close, four percent, 52-48, and the outcome caught most cosmopolitan Britons asleep at the wheel. Polls had predicted a tight vote, but with the opposite result.

London mass media reinforced this conviction by offering British exit as a nationalist pipe dream that was implausible at best.

There are times when clarity and margin of victory is as important as victory itself, and a national referendum begs just such clarity.

This nattering reassurance acted as a buffer — until Britain woke to a confusing new order. The confident didn’t vote at all, while domesticated anarchists actually voted in favor of leaving as a prank to the system.

The lesson in the British case was the ease of it all. A decision with vast ramifications was left to a binding referendum remote from necessary clarity.

Major states facing major issues, whether political or social, should revamp referendum voting to fit a two-round process —unless the the first round produces a clear sixth-tenths, or 60 percent, majority. Such a change would permit voters to show their feelings, but with second-ballot recourse to avoid national self-harm.

The first round would pave the way for a make-or-break, simple majority decider, no pranks or casual thinking allowed.

France had its own brush with the casual. In 2002, disdain for incumbent French President Jacques Chirac and his Socialist rival Lionel Jospin saw far rightist National Front Jean-Marie Le Pen finish second in round one, thus eliminating Jospin. A sobered electorate then handed Chirac another term in an 82 percent landslide.

It’s hardly outrageous to imagine a Brexit second ballot having gone the other way.

In fact, when British Prime Minister David Cameron announced the EU referendum in early 2016, he did so certain his country would never vote to leave, since such a choice would, and did, end his career.

Whatever the British public’s disdain for EU immigration policies and Franco-German arrogance, Cameron reasoned Britons wouldn’t be so foolish as to throw out the baby with the bathwater, which is just what they did — ignoring howls from stunned Londoners.

Getting out of the mess Brexit has provoked will be a tall order. The British economy is already suffering and is unlikely to win economic concessions from an EU now willing to fiddle as London burns. Last laughs can be loud.

But as British politicians weigh their next move, they’d be wise to first revamp referendum rules.

Doing this — preferably before Scotland again bids for independence — would make for greater social serenity and help make even controversial results literally unimpeachable.