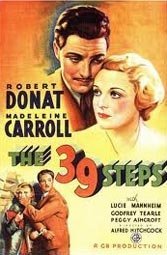 Alfred Hitchcock recognized the footprints of a thriller before he’d even matured the second sense necessary to concoct an exceptional one. It shows in this 1935 adaptation of Scottish writer John Buchan’s popular spy novella, which while written in 1915 is adjusted to poke at British paranoia over the growth of Nazi Germany. Richard Hanney (Robert Donat) is a Canadian national who becomes entangled with a mysterious woman at the theater in London. She’ll soon be murdered, but not before telling him mysterious agents are trying to smuggle a vital air ministry secret out of the country. Bumbling and persistence, which the right hero turns into gifts, leads Hanney to Scotland, where he meets a sinister professor who seems like a possible Quisling. No one believes the improbable Hanney, as charming as he is improbable. Until, that is, a blond he met on the train north — Pamela (Madeleine Carroll) — strides Hitchcock-esque into the picture and all is gradually made right. The charm of early Hitchcock is merger of silent-movie faces with insight into repartee and humor, which sometimes turns the relationship between Hanney and Pamela into the stuff of romantic comedy. At the same time, Scottish mist and cloak-and-dagger confusion keeps the story alive until the last. Working with the non-Hollywood basics, Hitchcock proves he can spin good yarn while and making people as ingenious as plot, including a burlesque star dubbed Mr. Memory. The stunning Carroll is a precursor to the blonde parade topped by Grace Kelly and Tippy Hedren.

Speaking of precursors, the film marks among the first-ever appearances of a helicopter in a chase scene, suggesting British awareness of the importance of things fluttering around in the air, something Hollywood didn’t get around to until Pearl Harbor.