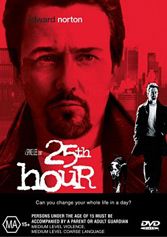 September 11th is a leaden collar around Spike Lee’s head in this take on David Benioff’s novel about an upscale drug dealer who has 24 hours to straighten out the loose ends of his life before beginning a seven year prison term. Ed Norton Jr. as Montgomery (“Monty”) Brogan is the film’s moral compass, assisted by Barry Pepper and Philip Seymour Hoffman as his closest friends. Norton is magnificent but the film is grave and self-involved. As always, Lee develops a vision of New York that is both disease and cure. Ground Zero and Monty are different but ineffable sides of devastation, though they each receive sentimental treatment. An impressive failure.