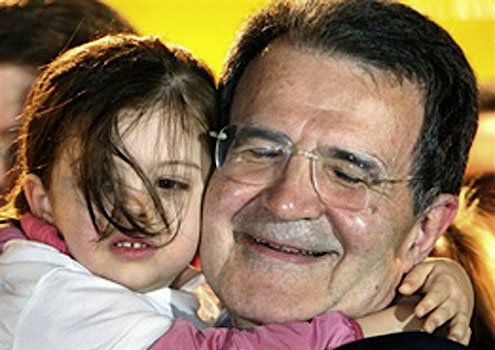 Despite Prodi's thrill, the results leave Italy governable in name only. Neither side won a clean mandate.
T

he good news: nearly 84 percent of Italy voted, an elevated figure that does the country credit.

The bad news: the results leave Italy persuasively governable in name only.

Neither Left nor Right performed convincingly, with dozens of loosely allied parties on both sides creating a pastiche of results.

“And you thought you were through with me,” said Prime Minister Silvio Berlusconi in demanding recounts that will no doubt further mar an already pungent public and political mood.

In the end, the recounts will probably bear out Berlusconi’s second loss of the month — albeit by thin margins.

For decades, Italy produced a stream of superglue governments based on shifting alliances. Many worked, however briefly. Others were undone by personal animosities.

Romano Prodi may govern, but he will rule with some difficulty. His vital 63-seat majority in the Chamber of Deputies is in truth artificial, based on a new electoral law that automatically awards 340 seats to the winning coalition and 277 to the losers. Under the old rules, the margin between the two groups would have been about 10 seats.

The vote itself was like none other in postwar Italian history.

Exit polls gave Prodi’s bulky Left a sizable lead, but such polls can trip on social mores. Leftist voters are traditionally chattier than those on the Right, who snarl at media intrusions.

Prodi caught the snarl just as he prepared to chant victory. He backed away.

But it would have made little difference.

Hyperbole in ever-increasing doses defined the campaign. Berlusconi used insults to jumpstart his populism among those convinced that Italy is best served by the loud.

Though foreign media harped on Berlusconi’s ongoing legal woes, his billionaire status, and his refusal to acknowledge evident conflict of interest, these remain largely Anglo-Saxon concerns that are more easily tolerated in a nation that pays lip service to expediency and is intrigued by power and volume. Parochial Italy likes methods that work — even if it publicly disdains the same methods.

Berlusconi’s sonic rants against the Left, feral in the final days of the campaign, sharpened the “for-me” or “against Italy” approach that became his hallmark. It worked to some extent.

The Left’s critical gains in the lower house came mostly from its fringes: the “refounded” and “straight” Communists scored well, as did the pro-environmental Greens. Shrill by training, these parties have long gained traction by opposing U.S. foreign policy. Though Prodi needed all three (10 percent in all), their success bore out Berlusconi’s assertion that the moderate Left depended on a hard core side whose ranks included anti-Americans and “no global” advocates. Their modest advances will give him fodder down the line.

Once again, though, crowing helps neither side.

Berlusconi may not have lost sweepingly, as some predicted he would, but his half-triumph lacks a practical ingredient. He is weaker, not stronger.

Prodi’s triumph is quirky; he is technically stronger, but the Left had hoped and expected considerably more.

A power stalemate, regrettably, is what Italy could least afford. A national unity government, proposed by Berlusconi as a face-saver, cannot work when there is no unity.

Both Berlusconi and Prodi said before the tally that a new round of elections would be necessary if neither side received a manageable majority. Such a prospect appears probable.

Upper and lower houses divided tightly along partisan lines are a forum for ambition and rhetoric, not places where policy is debated and made.

Pundits have been quick to divide the Italian electorate along red state, blue state lines. For some, the American parallel is a modern badge of honor and a legitimate sign of the times. For others, it’s tragic.

Italy faces zero population growth, weak industrial output, and hosts a disenchanted populace that despite the tally has little love for politicians.

Weighed down by joblessness, euro-flation, and confronting immigration patterns that are changing the country’s once-staid social and religious fabric, many Italians rue the 21st century.

But they are wonderful survivors. (Italy coined the phrase l’arte di arrangiarsi, the art of making do.)

How patient they will be is another matter.

The eclectic Left struggled because it looks like a hydra. It must change that view visibly and quickly.

But Berlusconi remains Italy’s only true strongman. He came within inches of outright victory. His bravado, including shamelessly labeling those who would vote against him as coglioni (“pricks,” roughly), stirred up soap opera passions his audience has come to expect.

The Left’s recurring drama, by contrast, has been quelling outbursts from within its own ranks.

Recrimination of course. That’s the Italian, and the political, way.

Berlusconi will thunder because that is his way — but it’s also a lead-up to a next round.

Italy must now invent a government from doubt. Should Prodi ascend, the Left’s slim majority will make each major roll call an adventure. The role of smaller parties looms large and the options of the larger ones contingent on how well they mingle in ongoing cocktail party that is parliamentary politics.

Yet if there’s a central truth it is this: there was no winner in Italy but the turnout.

Buffeted by divided loyalties, unhappy with both principle players, Italians split their preferences many ways, scattering votes according to visceral inclinations (again, the Communist and Greens inroads demonstrate this.)

Making a choice and living with the consequences are different concepts. One is a romance, the other a meltdown.

Welcome, then, to the Italian plant.