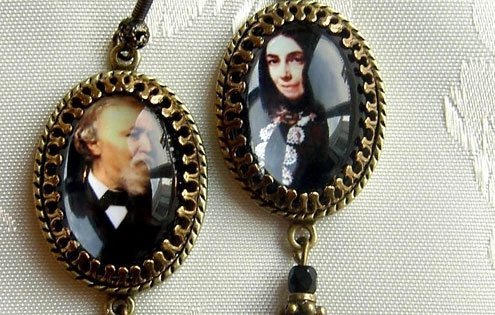 ictorian poets Robert and Elizabeth Barrett Browning were beloved in their native England, but it was to their adopted country Italy that their hearts belonged. A week after their secret 1846 wedding at London’s St. Marylebone’s Church, the newlyweds eloped to Italy. For the next 14 years the Brownings lived in Florence where they immersed themselves in poetry and politics that would mold Victorian tastes in an Italianate vein.

Robert and Elizabeth’s is one of the most legendary romances in literary history, in no small part owing to their son Pen’s 1866 publication of the astonishing 575 love letters that his parents exchanged during their 1845-46 courtship. “I love your verses with all my heart, dear Miss Barrett,” wrote Robert in the first of these intimate missiles. “I do, as I say, love these books with all my heart — and I love you too.”

Yet despite the depth of their love, it was a bumpy road to domestic bliss in Italy for these eminent English bards. Elizabeth, author of arguably the most famous love poem ever written — “How do I Iove thee/Let me count the ways” go the storied opening lyrics of “Sonnet 43” from “Sonnets from the Portuguese” (1850) — was a spinster six years Robert’s senior (she was 40, he 34 when they married) and an invalid who suffered everything from a mysterious spinal injury to tuberculosis to anorexia.

As a result of her pain, Elizabeth was a life-long opiate addict, although her dependency and ailments hardly affected her verse or reputation; she was nominated for Poet Laureate in 1850 but lost out to Lord Alfred Tennyson. Such recognition made her much more popular than Robert during their lifetime.

As if Elizabeth’s brighter star, invalidity and addiction were not enough for the brilliant, vigorous and gallant Robert to take on, there was Elizabeth’s wealthy and controlling father with whom to contend. Edward Moulton Barrett had forbidden any of his 12 children to marry, allegedly because he was ashamed of passing on the family’s Jamaican blood. (Both Elizabeth and Robert’s families were deeply implicated in the West Indies slave trade, an abhorrence that lead both poets to denounce slavery). The patriarch left the lovers little choice but to flee.

Italy had been Robert’s idea. His hero-worship of the Romantic poet Percy Bysshe Shelley who had lived and drowned in Italy, his absolute devotion to art (particularly Pre-Raphaelite) and his overall attraction to the many mysteries of bel Italia had thrice brought Robert to The Peninsula before his elopement. Like the wife and only child he cherished, Robert adored Italy entirely, organically and unconditionally. “Open up my heart and you will see/Graved inside it, Italy,” are some of the lionized Browning’s most famous lyrics.

As luck would have it, Robert’s bride took a shine to Italy too. “I love Florence,” Elizabeth wrote to a friend in 1847. “There is no place in the world like Florence, I am persuaded, for a place to live in — cheap, tranquil, cheerful, beautiful, within the limits of civilization yet out of the crush of it.” Elizabeth’s health also improved dramatically. In a December 1847 letter she wrote: “[M]ost days I am able to get out into the piazza and walk up and down for twenty minutes without feeling a breath of the actual winter.” This from a woman who had neither left her London sickroom nor walked unassisted for half a decade before Browning, clearly her knight in shining armor, whisked her away.

The Brownings’ newly charmed life unfurled in Via Maggio on the piano nobile of Casa Guidi, their home just across from the Brunelleschi-designed Palazzo Pitti, the former residence of the Medici Grand Dukes. It was here that they raised their son, composed their poetry and entertained a diverse and distinguished circle of friends and visitors that included John Ruskin, Margaret Fuller, Anna Jameson, Harriet Beecher Stowe, and Cardinal Manning in a salone done up with green walls and framed by red and white curtains — not coincidentally the colors of the then-illegal Tricolore. This was no doubt Elizabeth’s doing, as the Brownings had arrived in Italy with the Risorgimento in full swing, and Elizabeth, with tireless zeal, had dedicated herself to the Italian’s cause.

In 1851 Elizabeth published “Casa Guidi Windows,” a two-part political poem about Italy’s tumultuous struggle for unification. Part One, written in 1848, lauds the Roman Republic’s successes of that same year while Part Two laments its 1849 failure, in part by detailing the return of Austrian soldiers that Elizabeth spied marching past the Pitti from her windows at Casa Guidi.

Although the volume was panned outside of Italy (women meddling in politics being a hard sell to Victorian England), along with her 1860 “Poems Before Congress” which continued her Risorgimento crusading, “Casa Guidi Windows” made Elizabeth nothing less than a living hero to the Italians.

Robert, meanwhile, could have given a fig about his wife’s politics. Where Elizabeth’s poetry invoked Napoleon III or Garibaldi, Robert’s conjured Fra Lippo Lippi and Baldassare Galuppi. The poems of his Italian experience were concerned with moral and psychological aspects of the human condition and he relied on the artistic and cultural fabric of Italy to explore these themes.

Robert’s 1855 collection of dramatic monologues “Men and Women” is the pinnacle of his Casa Guidi days. It contains several important poems with an Italian thread including “Andrea del Sarto” in which the Renaissance painter, reflecting on his life’s shortcomings, delivers the indelible wisdom that “a man’s reach should exceed his grasp, or what’s a heaven for.”

It was not until 1869, eight years after Elizabeth died in the tender care of Robert’s arms at Casa Guidi (she did not live to see Italian unification), that Robert completed his masterpiece “The Ring and The Book.” The epic poem, based on Robert’s June 1860 discovery at a market in Florence of a manuscript recording the sensational 1698 Rome murder trial of a Count Guido Franceschini, takes as its closing (and opening) lines an allusion to the plaque that the Florentines placed on Casa Guidi upon Elizabeth’s death, likening her verse to a golden ring wedding England to Italy:

And, failing grace, succeed in guardianship,-

Thy rare gold ring of verse…

Linking our England to his Italy!