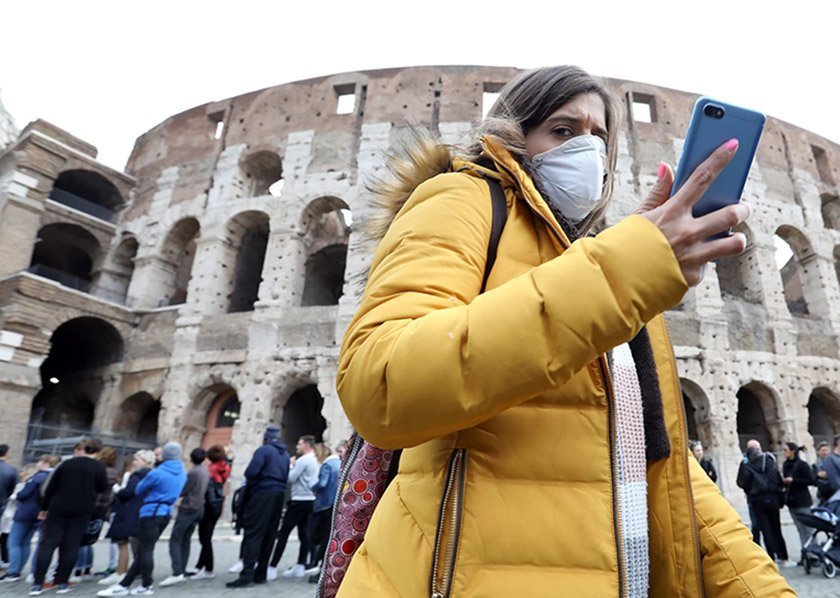 Only near tourist venues are masks out in force.
R

ome is living through a strange time. Its streets, usually packed at this time of year, with Easter looming, show no signs of wandering tourist hordes. Supermarket shelves are loaded with food, as if all had lost their collective appetite. My fellow denizens, freed for once from clumps of visitors, are apparently enjoying their lives in this changed city. In (semi-deserted) tourist areas, masks are plentiful, but not so much in the city’s sprawling working class neighborhoods.

The city’s population appears to be in a state of limbo, waiting for the realities of the coronavirus to come crashing down around them. Only then will they start scurrying to stores to stock their larders and hunkering down for the long haul. 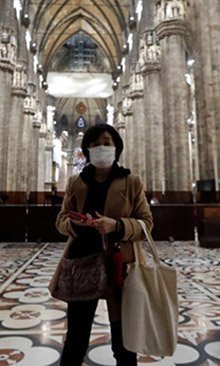 St. Peter’s all but empty in March? Unheard of.

At least that’s how things seemed to me on March 4th. I can’t tell you about today since I just arrived in San Francisco to begin a two-week book tour and working vacation that was scheduled long before that damned virus jumped the species barrier deep in the heart of China and began its wandering.

Just before our departure Italy announced it would start checking the temperature of all passengers on U.S.-bound flights. Those with readings above 99.5 F would not be allowed to board. We fretted and bit our nails until the last moment. There was also the American side to worry about. Would the U.S. slap a 15-day quarantine on all travelers arriving from Italy? So we felt some relief at just getting out, like Boccaccio’s fictional pals who fled to the hills outside Black Death.

But the first “New York Times” headline I saw on landing reported that California had declared a state of emergency following the death of a 71-year-old man, and it’s entirely possible that all the events we’ve come for will be cancelled as panic spreads.

When Covid-19, the coronavirus disease, struck northern Italy in February — seemingly like a bolt from the blue — Italian authorities lined up their defense with surprising quickness. They isolated the worst-affected areas, set up national and regional phone hotlines, called in medical trainees and retirees to man them. They also planned dedicated wards in infectious disease hospitals, instructed practicing physicians in telephone triage, and broadcast two concepts to the public at large:

Any patient suspected of having coronavirus is tested in isolation in an emergency room. If the patient is sick enough to be there, or in their own home, health ministry officials send a hazmat team to take a swab. Testing is free, preliminary results are available within hours. Anyone who needs to stay home is paid sick leave. Under the Italian National Health Service, nobody pays a penny for doctors, emergency rooms, or intensive care treatment.

Since humans are an imperfect species, the implementation of this planning has suffered a few hiccups. A Rome policeman developed a cough on February 28th after hosting a house guest from Lombardy, the northern region where coronavirus disease is most rampant. Instead of calling his doctor or the hotline, he went to an emergency room, where the ER staff left him to stew in the regular waiting room. As a result, he infected at least 15 fellow patients in addition to his wife and children. Not clear who was dumber, the doctors or the cop.

Ever-diminishing medical funding has also hamstrung Italy’s capacity to respond effectively to the growing emergency. If even wealthy Scandinavia will struggle to round up enough ventilators and intensive care unit beds should a true epidemic take hold, imagine Italy, which has half of Scandinavia’s resources.

And how about the other side of the Atlantic? How will the United States succeed in handling an epidemic that seems increasingly likely to hit hard, if not now then in in the autumn months?

My guess is badly. As a haven for rugged individualism and for-profit medicine, the U.S. is far less prepared than Europe to mount an adequate response.

Rome’s population appears to be in a state of limbo, waiting for the coronavirus to come crashing down around them.

To begin with, a third of Americans have no paid sick leave. A select few may have as much as two weeks, but such cases are rare. Which means that many people mildly ill from coronavirus will keep working, putting everybody around them at risk.

And as we all know, the U.S. is one of the few countries in which access to medical care depends on access to money. Between deductibles and co-pays, even insured Americans often find it hard to afford doctors’ visits, medications, and hospital care. This means many who should be tested for the coronavirus are likely to skip it in order to avoid starting a chain reaction of medical expenses – in fact, some are already being charged for the test itself. Not to mention the 27 million citizens who have no insurance at all, or the millions of undocumented immigrants who steer clear of hospitals for fear of Immigration and Customs Enforcement agents. Their fearful reluctance to come forward stands to swell the pool of infected people mingling with crowds on American streets, subways, stores, classrooms, and baseball stadiums.

Even stocking up on medications in case of preventive quarantine can be impossible in the American context – insurance companies don’t allow it.

In Italy, some 30,000 people have been tested for the “novel coronavirus,” versus only a few hundred in the vastly larger United States. The lag results largely from a Center for Disease Control (CDC) demand that it be informed of each test ahead of time. Broader testing is expected to begin imminently. Italy is notorious for disorganization, and has neglected epidemic preparedness. But this time it’s bested the U.S., which has been unable thus far to follow through with measures essential to containing the virus. Italian authorities recently told a Neapolitan businessman who had to travel to Milan for a day to stay home for two weeks upon his return. Upon arrival in San Francisco the customs officer chatted me up about my life in Rome. Not once was I asked if I’d been in northern Italy.

Then there’s the matter of the election year. America’s real experts on the science and the handling of epidemics, including Dr. Anthony Fauci, are on the sidelines, or being muzzled. Why? The coronavirus task force is run by Vice President Mike Pence, who as governor of Indiana once suggested the best response to the state’s HIV epidemic was prayer. Meanwhile, President Donald Trump insists a vaccine is in the offing and suggests his adversaries are dwelling on the virus to damage his campaign. Clearly, the situation in both my native land and my adopted home is evolving not just daily but hourly, and much of what I’m writing today may be out of date tomorrow. But whatever course the virus takes, this is no time for silence.

— Editor’s note: Italy has declared a nationwide ban on unessential travel. This will also affect travel into and from Italy. Public transportation continues to operate. See the Italian National Institute of Health website (in Italian) and the U.S. coronavirus crisis site for further information.