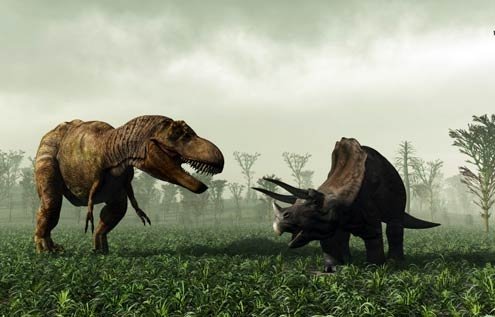 he two Ts, Triceratops and Titanic ruled my early teenaged life. One was a Cretaceous dinosaur with three horns, the other an ocean liner whose spectacular sinking obsessed me. To Triceratops I owe my memory of pre-human periods. I knew all about Cambrian, Silurian and Carboniferous (my favorite) long before I stumbled on Jurassic, and well before anyone wrote a novel, let alone made a film.

Titanic was another story. I chanced on Walter Lord book “A Night to Remember” on a remainders table in London as a 10-year-old and was in immediate awe of its cover, a painting of the big ship sinking in the night, its stern rising upward like a mummy’s hand.

Images of Triceratops were easier to find. Dinosaur books were filled with them, usually drawn in pitched battle with Tyrannosaurus Rex. These multicolored fights made me decide I’d become a paleontologist, which impressed my teachers but alienated my neighborhood friends, who assumed I’d be studying sandbox buckets — pales — for a living.

Biking through the neighborhood I imagined time standing still for me alone. I’d round a corner and enter the world of the Cretaceous, peddling hard to avoid hard-charging Triceratops. I’d always win, of course. I once lost control of the bike and grazed a car, flustering its owner when I explained my dinosaur predicament. “You can’t live in your head, kid,” he said. “You’ll get yourself killed.”

Titanic lived in my head day and night. I studied every detail of the ship, even saving up to commission the building of a model from a handcrafter (it took a year of savings). Back in London, I’d shop for ocean liner postcards and books, tiring out even my patient father. A fluke of persistence led me to a copy of American novelist Morgan Robertson’s schlock novel “Futility or The Wreck of the Titan,” in which he conjured a giant, unsinkable British liner named the “Titan” that rammed and iceberg and went down off Newfoundland on its April maiden voyage. Most died because the liner lacked sufficient lifeboats. Robertson wrote the book in 1898. The Titanic was launched 13 years later and soon met its presaged fate.

This and other tidbits put the ship into my personal supernatural. I dreamt of being on a lifeboat and watching as the crippled liner rose into the sky. I befriended a London bookseller, Harold Storey, who politely sent on new Titanic material whenever he got it.

First came a 1915 book by Charles V.A. Eley with the laconic title “How to Save a Big Ship From Sinking” — he suggested “centrifugal suction pumps.” After that came passenger Lawrence Beasely’s rare account, “The Loss of the SS Titanic,” published late in 1912: “In the distance it looked an enormous length, its great bulk outlined in black against the starry sky, every port-hole and saloon blazing with light. It was impossible to think anything could be wrong with such a leviathan, were it not for that ominous tilt downward in the bows…”

These books, and Lord’s, transformed me into a reader. I wrote Lord a fan letter (which my father corrected), and Lord promptly replied with an invitation to visit his apartment in midtown Manhattan. Afterwards, my father and I walked along ocean liner row in the West 50s. Paradise.

All this occurred years before the Wood’s Hole team stumbled on the wreck of the ship in the 1980s and Hollywood’s P.T. Barnum, James Cameron, began oiling his celluloid machinery. Nor had Triceratops yet met “Jurassic Park” author Michael Crichton, whose lead Steven Spielberg would follow. Reptile and sunken ship had no inkling of what lay ahead.

For Triceratops I had my bike escape and forays into nearby Rosedale Park, where late spring dusk was spooky enough to make room for creatures whose shapes I made up in my head and sketched (badly) in school notebooks.

When I read about a dinosaur bone field discovered in Tanganyika, I was determined to get on the next plane to Dar es Salam — names and places I’d looked up in the atlas. Within months, Tanganyika joined Zanzibar to become Tanzania, geopolitics I learned thanks to an extinct dinosaur. Zanzibar’s rare leopard also invaded the Sultanate of my mind’s eye, illustrating whole books of daydreams.

Sunken Titanic I imagined as having drifted toward the center of the earth, a hulk of iron and steel compressed by waters which contained fish with no eyes that fed on the darkness around them. I scared myself into conjuring up their names, one called the Noirfish and another the Taropus. Over my bed was a framed and enlarged copy the front page of the New York Times from the day after the sinking, which took months to get.

Later, I saw Spielberg’s movie, marveling at his Triceratops, and Cameron’s Titanic extravaganza, amazed at his computerized narration. Since then, dinosaurs and sinking ships have lost some of their Kiplingesque mystique, if for no other reason than the disappearence of the need to imagine them.

Fantasy’s secretions are available on demand, whether in movies or games or current events. Self-generated imagination as a component of personal wizardry matters less than the slickly engineered kind created to stand in its place. Digital sorcery has mostly replaced planetariums.

Worst of all, at least from my perspective, the Noirfish and the Taropus are extinct.