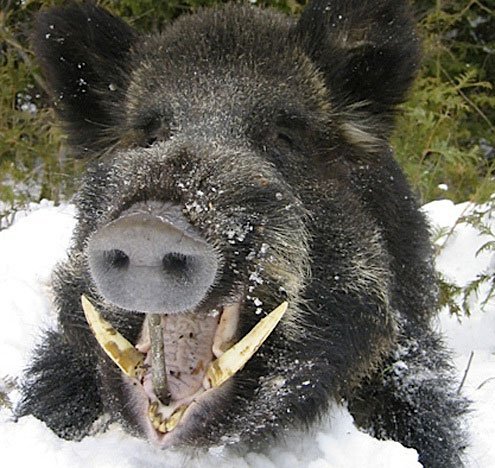 I cursed my husband for not helping me to finish the boar off.
S

o much for the peace and quiet of the countryside. There we were, driving back to our new home in Umbria after an evening in a trattoria, when a giant silhouette loomed out of the darkness, followed by a deafening thump and an unpleasant sensation as flesh collided with metal. The car shuddered to a halt, and through the windshield, as smoke poured out of the engine, we managed to discern the cause of the impact — one very large and now decidedly unwell wild boar.

What ensued can only be described as a clash of cultures, and not just the obvious clash between my own Anglo-Saxon blood and that of my Neapolitan husband. After checking that the children in the back were unhurt, my first thought, in true mad Englishwoman style, was to tend to the injured animal. Seeing that it was clearly dying, I looked around wildly for some heavy instrument to put it out of its misery. It was only afterwards that people who know more about wild boar than I do pointed out that trying to bash such a fierce animal over the head, however moribund it might appear to be, was pure folly.

As I wrestled with the car door, which had been completely crumpled and jammed tight by the weight of the poor beast, I cursed my husband for not helping me to finish the boar off. He meanwhile was uttering a barrage of expletives and pointing to the rising cloud of steam. Not only had one side of the car been caved in and most of the front badly damaged, but the radiator had gone as well. It was now 1 o’clock in the morning, and we were stranded, miles from anywhere, with not another soul in sight. Or so we thought.

Enter a jeep, one of those flashy ones with a spare tire slung on the rear and lots of chromework. It emerged out of the darkness, as if from nowhere, and pulled up alongside us. What a stroke of luck. Someone had come to our rescue. We couldn’t have been more wrong. Without a word, four men climbed out of the jeep and opened the rear door. Then they quickly spread out a tarpaulin on the immaculate interior before turning to the wretched beast, which had now breathed its last gasp. In a matter of seconds, they had hauled the massive animal into the back of the vehicle, slammed the door and had gone. We stood there, unable to take it in. They hadn’t so much as asked if we were all right, let alone if we minded that they were making off with the cause of all our troubles. And how had they known about the wild boar in the first place?

Much later — more than €1,500 worth of repairs later in the case of the car — our encounter with the wild boar helped me understand a number of things.

First, that when it comes to food, Italians, and country people in particular, take no prisoners. I’ve often thought that I’d do anything rather than be left on a desert island with an Italian. I subsequently learned that our wild boar would have been worth an appetizing €600, for its steaks, hams and sausages. The second lesson is that no matter how deserted the countryside may seem, there is always someone watching you, a sobering thought if ever there was one. Finally, the myth about the countryside being a quiet place is just that, a myth. Try taking a stroll through the woods outside Spoleto on a Sunday morning and you’ll see what I mean. The trails through the forest are heaving, not with joggers, as they might be in Northern Europe or the United States, but with hunters and foragers, all out to find something free to eat.

Whether it be small birds, mushrooms or wild asparagus they are after, the army of khaki-clad food gatherers can be guaranteed to be out in force. And as for the air quality on the roads leading to the woods, I’d rather breath the fumes from the raccordo anulare on a Monday morning.