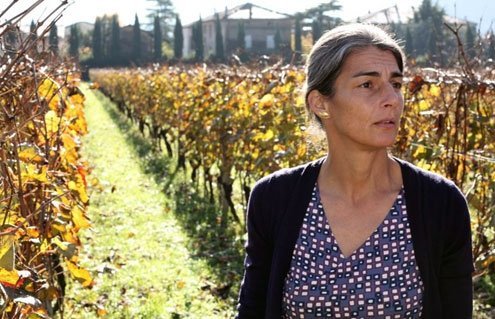 “My wines possess nature’s slowness,” says Elisabetta Foradori, who in 1976 inherited 22 hectares of Teroldego vineyards in Mezzolombardo, located north of Trento. Viticulturist Foradori’s first instinct was to cut quantity and slowly increase grape quality through measures such as pruning.

But the effort didn’t satisfy her. She eventually tore out the existing vineyards and replanted them with a smaller quantity of top-notch grapes that she decided to produce organically. In 2000, she committed herself to biodynamic farming and adopted the holistic principles of Rudolf Steiner, the 20th century Austrian philosopher who embraced the concept of spiritual science.

Everything about Foradori’s wines expresses a sense “place,” or terroir. Exhaustive research led her to revive Teroldego clones, yielding a wine that reflects the unique characteristics of the Campo Rotaliano, the alluvial plain of the Noce River.

When the Noce was rerouted in the mid-19th century, it left tiny pebbles and larger stones in the subsoil, creating excellent floodplain drainage more typical of hillside vineyards. In summer, the river-carved cliffs on each side of the Noce channel breezes from Lake Garda. In winter, they protect the vineyards from alpine air.

Foradori produces about 120,000 bottles of “Foradori” Teroldego Rotaliano DOC (100 percent Teroldego) but only 30,000 of “Granato” Vigneti delle Dolomiti IGT Rosso (100 percent Teroldego, made from the best grapes from her best vineyards). Though DOC (Denomination and Origin Controlled) is technically a stricter wine classification than IGT (Typical Regional Wine), the “Granato” is Foradori’s top quality wine and consistently receives international attention and praise.

“Granato” 2004 (€25-30) was an exceptional vintage, perhaps the best in a decade, and is destined to improve further with another five years in the cellar. It’s a dense, robust red with the complex flavors of berries, dark chocolate, earthiness and spiciness. Teroldego is genetically related to Syrah but has its own refined but robust signature. “Foradori” DOC (€15-20 for years 2005-2007) is less complex. It’s ready to be drunk young, without cellaring.

Bossi Fredrigotti, a small, family producer that recently went into partnership with Masi of Verona, produces Bossi Fredrigotti Teroldego Vigneti delle Dolomiti IGT outside the Campo Rotaliano in Rovereto, near Trento. A lighter and less complex wine, it’s nonetheless balanced and interesting. A “wine guru” friend of mind had it with a Sunday panino and was delighted. It is in the €10-12 price range.

The lands north of Trentino yield another interesting native grape, Lagrein, which has a 600-year history. Similar to Teroldego, the wine is robust with berry flavors, hints of earthiness and chocolate, garnet red color, nice acidity, and strong but not rough tannins.

Elda and Heinrich Mayr-Nusser produce Lagrein (with a small percentage of Teroldego added) on their small 2.5 hectare organic estate on the outskirts of Bolzano. The wine has a naturally-“round” nature and lacks harsh tannins, which means its makers can do without barriques.

Their richest wine is Sudtiroler Mayr-Nusser Lagrein Riserva DOC, which requires three years of aging. Like Teroldego, it can be consumed early, but improves with six-to-nine years in the cellar. Mayr-Nusser Lagreins sell in the €20-30 range and receive 90+ scores from international wine experts. But they’re often hard to find.

More readily available are wines from the Tenutae Legeder, which makes two versions high-quality Lagreins: Alois Lageder Lagrein (€14-20) and Lindenberg Lagrein (€20-25). The latter is an organic, biodynamic “cru” made only from Lageder vineyards.

Lagreins, like Teroldegos, are best paired with the meat-based dishes that hard winters serve up. Neither overly tannic nor heavy, they also go well with lighter meals and cheese.

For years consumed locally but overlooked elsewhere, these wines are coming into their own and winning the recognition they deserve as interesting alternatives to “the usual” Cabernet, Merlot or Syrah.