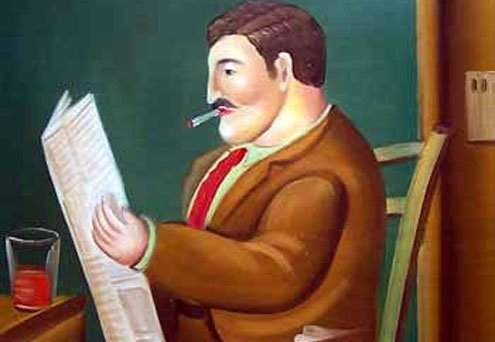 t the Rome airport comes a sudden change of plans. I am shunted from the international terminal, where I’d been waiting for a flight, to the domestic one. Confusion about planes and flight crews has undone the morning’s marching orders. All are confused and apologetic. I just follow directions.

Doing so, I become Alice and the terminals sovereign state looking glasses.

Until the announcement I’d been sitting among mostly American passengers headed home after an Italian vacation. Some were silent. A few chatted. The large majority petted and poked at their digital gadgetry.

No one wore a jacket or a tie, with jeans, slacks, shorts and sneakers in their stead. A few, school group contingents, had T-shirts and backpacks. Young and middle-aged woman, mothers and daughters, looked like men, emissaries of the casual androgyny that the 21st-century and its app-armed travelers take for granted. The Prada and Gucci stores near the gate, beckoning fingers, were empty. Only the restrooms and coffee bar had crowds.

I saw a few book readers and some with Kindle devices, but no one with a newspaper.

I wouldn’t have paid this any mind had it not been for the terminal shunting. Off we went, a cranky group of 20, herded into a packed bus that coughed from international to domestic, a hectic area where thousands of passengers board dozens of daily flights from Rome to Milan. We’d travel through a secondary city to get to our eastern destination.

From the foreignness of international, a culture I’m close to only when an American journey lurks, I found myself back among those whose many peculiarities my head and heart know for better and worse.

Here were the Italians, most of them men from 30 to 60 dressed in suits and ties or decked out in studied casual, talking loudly or conspiratorially into mobile phones, acting out the parts they know best and love most: as human transmitters, verbal operatives, persuaders and con artists. And the women, some tucked and brushed, others more natural, their colors and looks intimately manufactured for public viewing. A few preened. Like the men, they fidgeted with phones (talking is the new smoking). There were no shorts or sneakers, hardly a hint of international’s daily disheveling.

Most of the over-60s, remnants of the country’s patriarchal business and political class that still respects age as a form of insider endurance, were buried in newspapers, aisle after aisle of them dug into newsprint and sports print, their accordion elbows jutting outward (the classic page-turning pose), fingers smudged, their daily scanning seemingly as intense as ever.

I read daily about some new online conquest, or about Steve Jobs’ latest and most gratuitously plentiful device. Every day I tell my friends the days of print are all but gone, joining the bleak chorus that would see ink fossilized, along with the harder work of communicating well in the age before facilitation.

Yet Italy grounds my hyperbole. Few nations resist change as vehemently. No doubt many of domestic terminal men and women will eventually abandon their newspapers for body-snatching pods and pads, or simply retire from public life. But for now they’re present and accounted for and wedded to anti-casualness, words acquiring heft based on their unmoving presence on a page, deletions not allowed.

The ability choose a specific newspaper and the inability to cancel it address a life in defiance of the instant, an acknowledgement that “quality time” — as the international passengers might call it — means the known and the concrete. With it comes the social imperative of stylish dressing, because a class society prizes first impressions.

These of course are just tricks of the light.

But with one world having all but relinquished discretion’s eye-pleasing side, old-school Italian vanity shines as a priceless antiquity, and Italians living examples of a race of creatures born and bred to an awareness of plumage, even when traveling (particularly then, since it’s strangers that most need impressing).

In a time when depression is a faddish badge of honor and lowbrow the only brow, contact with personal elegance is inspiring. It’s a disciplining of the self for the benefit of a closed society still mostly appreciative of its good-looking self, something the inhabitants of the international terminal forgot about years ago.