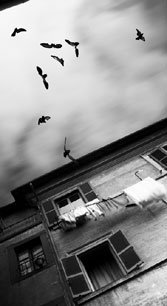 A society marked by emptiness...
S

o many fumbling plumbers nattering about a leak — not Wiki’s; a leak whose source no one really knows, and even if they did, not one, not in this group, would fix it, or pretend to try, since the hemorrhage suits their purposes, intrigues them, gives them reason to fret and shout, debate, vote on themselves, dine loudly. For plumbers, leaks are proof of life.

The plumbers are Italy’s politicians. Color me cranky.

Then you have the sociologists. December is the month of heavy weigh-ins, reams of fascinating if elitist rhetoric destined to delight the highbrow.

The Censis Institute is the Don Giovanni on that stage, Italy’s year-end statistical tenor for four decades. Behind its annual socio-psycho-economics portrait is 78-year-old sociologist Giuseppe de Rita, a perceptive intellectual with an elegantly Teutonic appetite for the gloomy, not that Latin Italy isn’t just cause for elegant pessimism.

If de Rita isn’t a plumber’s adjunct, he’s certainly a plumber’s shrink. And the country’s as well, at least unofficially. Last year he worried about the poor health of the “psychological collective,” which was, he said (in as many words, and more), was going to the dogs. In addition to “weariness and shame,” “degradation of values,” Italy could no longer depend on its “vital individualism” to stay on track.

This year, the humorless de Rita approaches Italy as if it’s already located in the digestive tract of a monster, where floatation cushions don’t work. It might not even know it’s been swallowed. Silvio Berlusconi has fallen from his own comic book, vulnerable to real-world damage. Teens swan-dive from balconies. No one knows the past or can imagine the future. “We’re a society dangerously marked by emptiness, in which a historical cycle once filled with passions and social conflict is being replaced with one that annuls, with a ‘nirvanization’ of passions and conflicts, with a putting aside of anything that ruffles apathetic self-referential impulses.”

Lost at “nirvanization”? No matter. It’s just de Rita at once humoring Freud and Heidegger. Substitute deadening, or narcotizing, and you get the picture. But it doesn’t end there.

“A minute chronicling of Italian life reveals much that is purely pulsional, without telos, enshrined in self-referential and narcissistic egoism.” Society is “entitled and flat” stricken by “growing personal insecurity.”

Pulse and telos (Greek for goal) aside, the portrayal is that of the mass unconscious as a big and helpless baby — “implicitly resigned” — that wants just to be left alone to rattle around, watch TV, distract itself, content to stay alive even in the absence of goals or a sense of purpose. “Summed up…” — and here’s the clincher — “… it’s a society unsure of its human substance.”

According to de Rita and his wise men, even if the plumbers wanted to fix something, they couldn’t. They stand astride fractured ground. The social landscape is so horizontal — flat-lined — that no one can even identify the vertical, understood as a life-blip.

Silvio Berlusconi may be “balconing,” or being made to, but if he goes what next? Who or what stands to replace him? His tormentor, Gianfranco Fini, is too staid to play savior. Polls put Fini’s approval rating at 44 percent, hardly luminous. If elections were held now, Berlusconi’s People of Freedom would remain Italy’s leading party, followed by the leftist Democratic Party and the Northern League. Fini’s Future and Freedom movement doesn’t even project into double-digits. Not mention that a dispossessed Berlusconi would make it his mission to ensure Fini’s future unhappiness.

It’s a variation on same old, same old — even if seen cheerfully, which is difficult. Subtract De Rita’s warnings about national resignation and it’s nearly identical to the landscape of five years ago, when the only game in town was Berlusconi-bashing. Bashed (dented, really), he soon returned. As Americans like snarking: “How’d that work out for you?”

Sure, smaller parties might glue together a minority government, but that does nothing for the flat-line. Meanwhile, Antonio Di Pietro, the head of Italy’s Values Party, says all he cares is voting Berlusconi into oblivion. That’s his potion. The rest can wait.

Not really, de Rita responds indirectly, reserving a final jab for the word “values,” which he says is a parody of itself. It’s the chitchat of plumbers, whose default mantra is cynicism.

“Concepts of discipline and authority,” says Censis, “are daily losing not only their phenomenological value, but even their symbolic one, which is the side most directly tied to the psychology both of the individual and the collective.”

Final translation? There’s no Italian bottom line. All is passive. Anything can always drop another notch, which in plumber’s terms means that the idea of the buck stopping anywhere has yet to be invented.