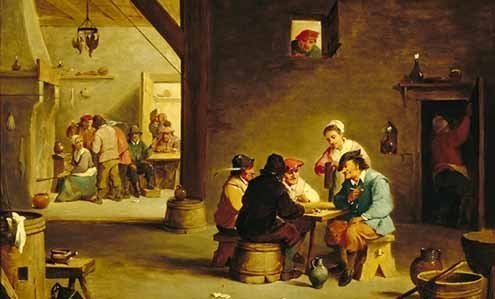 In it's 17th-century incarnation, an osteria was a place for informal dining in which the house decided the menu.
F

our names form the core of the Italian dining experience: ristorante, trattoria, osteria and pizzeria: Each of these establishments has a clearly defined role, but telling them apart in terms of culture and food isn’t as easy as it might have been a generation ago.

For example, all Italian bars serve espresso coffee and pastries. But they also sell soft drinks, sandwiches and alcoholic beverages. Seeing someone at the counter drinking beer or Sambuca for breakfast doesn’t faze locals. Conversely, not all osterie will provide the reasonably priced meal in unpretentious surroundings their name suggests. Pizzerie obviously serve pizza, but most aren’t open for lunch.

The variety, quality, depth and range of Italy’s eating establishments is something most countries can only dream of. Here’s my shortlist of Italian restaurant categories, with a pinch of history thrown in.

Ristorante: The word “restaurant” has its origins in 19th-century French, from restaurer, to “provide food for,” literally, “to restore to a former state,” which means rest and replenishment. Travel was at the heart of the concept. A restaurant was intended to provide rest as well as food and beverages. During long horse-drawn carriage journeys, travelers normally stopped at staging inns, places with stables and rooms where passengers could freshen up. Rested and after a light meal, they’d climb into a new coach with a fresh set of horses for the next portion of the journey.

In time, the food served at staging inns became increasingly important, and the idea of being “restored to a former state” was no longer restricted to sleep, rather included a wider form of nourishment through food and drink. The classic Italian ristorante is an eating establishment seen as more sophisticated than an informal trattoria or a humble osteria, with correspondingly higher prices. Printed menus take the place of verbally recited ones and the check is not scribbled on a notepad leaf, rather presented as a legally valid receipt. By definition the service should be elegant and formal, the menu should be articulate, matched with a similarly comprehensive wine list.

Trattoria: The word trattore is Italian for “tractor” as well as a less common term for “farmer.” When smallholders hauled their crops into town to sell at larger markets, it was customary to also drop off goods at communal bake houses (an idea dating back to Ancient Rome). These large facilities were equipped with the neighborhood’s only working coal- or wood-fired ovens. They were where residents brought their food to be cooked, eaten and, in some cases, sold. Produce, chickens, sausages, eggs and other rural goods sourced from the trattore’s land would be consumed in this makeshift eatery. A trattoria was therefore a place for a hearty meal made with fresh, wholesome ingredients pulled straight from the farmer’s land.

That aspect is now obsolete. But the term trattoria remains tied to the idea of serving of informal, unpretentious, homespun food. Atrattoria usually offers seasonal dishes on a not very extensive menu. It features a handful of signature dishes that rotate — in Rome in particular — as weekly specials. Giovedì gnocchi, venerdì baccalà, sabato trippa Each day of the week traditionally is linked to a specific dish, so that on Thursday Romans shape boiled potatoes and flour into gnocchi, on Friday they abstain from eating meat and opt for (what used to be) affordable codfish; on Saturday they splurge on braised tripe. Some historic Rome trattorie still abide by these ancient precepts.

Osteria: Sometimes also spelled with an “H,” hosteria or with a Latin sounding “a,” hostaria, these were originally simple, inexpensive and informal eateries. An oste, Italian for innkeeper (and origin of the term host), was the person who sold table wine poured from a demijohn. Salty snacks encouraged more drinking. When the wine was mediocre, the oste would also serve quartered fresh fennel, finocchio. This would trick the drinker’s taste buds. Hence the Italian term, infinocchiare, to bamboozle. In some cases, osterie also rented out humble rooms, usually located upstairs and above the communal area. In this case the place was called a locanda, and the innkeeper locandiere.

Typically a drinking hole for men, osterie gradually started adding more food to its jolly assortment of good company, raucous card games and local wine. The dishes were a simple as the décor, and relevant to the region, usually with a daily choice of soup, bread, stew, cheese and little else. But it was hearty, fresh and cooked in the back by the oste’s wife. Nowadays osteria is applied to a very different kind of venue. Expensive restaurants sometimes use the name osteria to in an effort to exude rustic charm. Consider Osteria Francescana in Modena, a Michelin star restaurant whose celebrity chef is among the best in the world and where a meal runs hundreds of euros.

Pizzeria: You’d think a pizzeria would be a simple and inexpensive pizza joint shelling out pies from a roaring oven. That’s right, up to a point. Increasingly, today’s pizzerias are going for the so-called “gourmet pizza” trend, adding elaborate toppings and serving up pies for a whopping €15. So much for its “cheap meal” roots. When groups of Italian teenagers dine without parental supervision, they go to a pizzeria. It’s a given. But in some trendy pizzerias can stretch Friday night allowance even if all the teenager is having is a Margherita and a can of coke.

Some pizzerias have begun serving pizza for lunch, but the old school norm — and to extent a guarantee of quality – is firing up the wood-stoked oven for evening trade only, and employing a single shift of expert pizza makers. In the past, there wasn’t money to be had in baking pizzas. The main investment was hiring a proper pizza chef, since shaping and baking pizzas requires skills that are honed over an intense training period. To this day Neapolitan pizzaiuoli attend special pizza academy schools to obtain certification and extended unpaid internships.

Agriturismo: Many working farms are set up to sell their products directly at a spaccio (farmstead sales) point. One that also serves meals and provides accommodation is known as an agriturismo. Rooms are generally quite affordable, the food rustic and wholesome, ingredients sourced entirely on the premises. Most are open on weekends, for lunch.

Tavola Calda: I’m nostalgic about tavola calda. Literally, “hot table,” this informal cafeteria-style eatery has sadly become almost extinct, replaced by trendier places, including bistros and (what a dreaded term) gastro-pubs. Before being replaced by a mediocre Asian fusion all-you-can-eat joint, my little neighborhood tavola calda would open at 11 a.m. and cook mostly homemade regional dishes served in large metal trays kept warm by the heated counter filled with boiling water. They made the best damn vitello tonnato on the planet, and an unsurpassed arrostino al latte (roasted piglet in a curdled milk gravy) served with an extravaganza of seasonal veggies au gratin. Though I’ve tried reproducing their recipes, but I’ve never topped either their quality or flavor. The best part of eating out at the tavola calda was sitting at communal tables with strangers, silently savoring the same fantastic food.