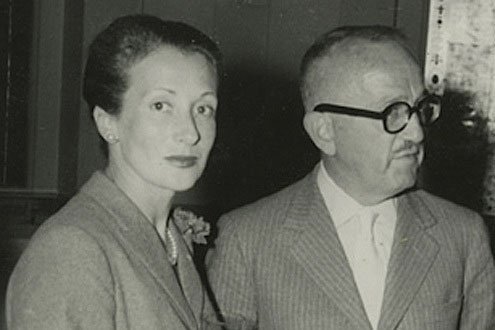 My parents’ marriage lasted 13 years. Photographs of the two of them at peace are few.
W

hen I can’t sleep I leaf through phone directories. I found three such tomes in the attic, two from the 1960s and one from the 1950s, when the family lived in Rome as three.

The period was the briefest excursion into the pleasant. My parents’ marriage lasted 13 years. Affectionate photos are few. One, taken in Formia in 1955, shows them on a beach, she lounging on a chair; in another, from 1960, my mother celebrates her U.S. citizenship. He smiles beside her. They look tipsy.

In the phone directories are circled names, of people and establishments mostly— the restaurant Passetto, for example —as if the annotated directory served as guide. My mother enjoyed Passetto, near Piazza Navona. I remember her there with a man named Fascia. He had a driver and a 1964 Mercedes. She would sit with him for hours; he ordered green-tinted drinks that came in tall, thin glasses. They hardly spoke.

Once, when I shouted at her — it was 1968; I missed my father — she told me about the abortions. Did I understand her? Good question.

The phone book from the 1950s has two symphonic-sounding words on their covers: TELEFONIA ITALIANA,. Most home numbers contain five digits or six. A page is dedicated making international calls. There’s a small black and white globe on the page that makes the world appear something remote from Italy. Switzerland is circled in black pencil.

Fascia, my mother explained in Italian, was a “gentleman friend.” She had the right, after so many years of unhappiness and grief with my father, to accept his practiced flattery. It consisted largely in sending flowers that arrived in hay-laden baskets, or sending the black Mercedes, driven by tiny Arturo, to fetch her.

I did not like Fascia, who wore thick dark glasses and masticated the air when he yawned humidly; he reminded me of criminal masterminds I had seen caricatured in comic books and imported into my vivid fantasy world, along with scheming dinosaurs and incredibly large ocean liners. But Arturo, slightly taller than midget, won me over with his hands. They were twice the size they should be in proportion to a body of his miniature size and were calloused so thickly that they looked like a tumor’s idea of appendages. I asked Arturo how he got his hands to be this way, but he rarely responded in full sentences. “La terra,” was all he’d say about them, as if he’d imparted a feral clue I should seize on. When I asked what he did on the land he grunted in a language that slugged me. Once, I took out my street map and asked him for advice regarding the most direct route to the center on foot, but he just shook his head deliberately. He could not read.

The abortions were conducted in Switzerland. My brother or my sister, one of each or both, were scraped away, subtractions performed on order amid bored mountains. (I shouldn’t speak righteously; I would have two children of my own, about 24 and 17, had it not been so easy to refuse them. The women dissembled; I did the same. Then it was over.)

The referring doctor’s name was Ercole Pratafulco. Hercules. At my father’s behest, Hercules arranged my mother’s Swiss visits, in 1955 (I was two) and 1957. Pratafulco’s name, like that of Switzerland, is circled in the directory. A portion of the page is torn away, as if someone once pressed too hard on a sharp pencil and the lead broke, causing the point to cut through the page. Some pages have sharp edges. Some have stains, maybe milk or juice. You might worry (I do) about paper cuts. Get too excited and suddenly you’re bleeding.

My mother said she hated the train rides back. Overnight rides, through Basel, in winter. The clicking of the carriages unnerved her patience. She dreamed of animals. My father’s logic, she recalled, was flawless. Not enough cash and a small flat. A family of two, of three, on his income? Impossible. She understood, she said. But she also hated understanding, and him.

Sometimes when I can’t sleep I think about my married friends. They are a troubled species. Many are separated or divorced, walking canisters of human hurt dissecting their own condition to sympathy or pity, warranted or not. Children inflate both their grief and logic. The rest is given over to other balms, often faith or travel, the dry-dock operations that seem to restore basic logistics to a blemished lives.

Traveling down from Basel, through tunnels, you hear only the whining of the undercarriage, said my mother. Speech goes away.

Fascia liked tinkering with his glasses. He’d nag the bridge with his forefinger to examine me more closely. I’d then see his alien eyes, marbles in a glue of blue water. And if he cried? Would they drain out? What did my mother see in such a man with my father still present, virile, strong, brilliant, lonely?

I asked her once, at Passetto, when Fascia had stepped away. My question was fierce and she ignored it at first. Then she nodded.

I did not understand. Not at all.

But it’s all in the telephone books now. When I can’t sleep there’s Pratafulco and Switzerland, there’s the schedule for the Basel train. By the time Fascia appeared my mother had tired of male hands, of the havoc of physical caring. Touch is what she barred. That man would never lay a hand on me. It sounded at the time like she was announcing transgression. It was anything but.