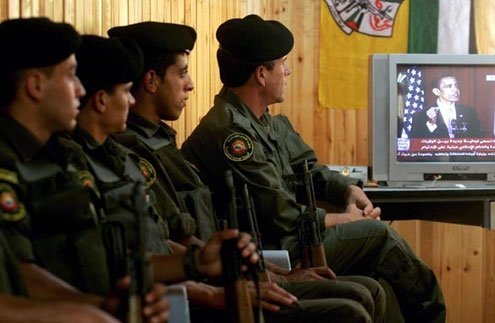 ad about Yes We Can Obama? Not quite. The question is why. Why is this suave post-Bush president still trapped in amber?

Inherent coolness is part of it. As a result, his White House is staged, rehearsed and cautious — Teflon with a sheen. His smile is immaculate and brilliant, his tone unwavering. He’s as at ease with Sarkozy as Chavez, Mubarak as Medvedev. Everybody’s a potential pal.

His Cairo speech to Arabs was etherized splendor. Nary a word in the wrong place. Not a bead of sweat. He’s busy mending frayed bridges, to which American diplomacy owes him a debt.

The American presidency is the supreme delivery system. Its occupant is the man-in-the-middle of an global consultancy in which the president is both the chief and the fundamental product. The more charismatic the figure, the more vigilant the apparatus in protecting the product to tarnishing, sometimes to a fault. The tailoring of words and deeds becomes its own substance. Global Obama is a consensus in progress.

So far, he lacks the kooky genuineness of George W. Bush, American’s eight-year-long diversion, who was annoying but utterly unself-conscious.

Bush detractors say he was unbothered about being president or behaving presidentially because he was little more than a lug wrench in a toolbox hauled around by an immoral image-maker (Karl Rove), a cunning vice president (Dick Cheney) and a conniving defense chief (Donald Rumsfeld). Being manipulated is hardly hard work.

Another truth is that Bush simply didn’t, couldn’t, behave slickly. His modest IQ narrowed the options. This may have hindered policy but gave him an authentic feel, like a bible-toting, basement-room CB operator who from time to time emerged cheerfully from the basement.

He is, as he’s often said, a vessel for the dreams of others. And American change begs awareness (if not hosannas) among those who for eight years stood in the Bush-bashing line. (Though many scampered to the front very late.)

Obama is fresh but not visionary. His inbuilt deference limits the ego that vision thrives on.

Blame it on economic woe or security restrictions, but the presidency’s 20th century expansiveness has new-millennium limits, which in turn limit Obama. There can be no Clintonesque walk down the Champs-Élysées — never mind Mikhail Gorbachev’s nothing-to-lose leap into the Washington crowd. Obama’s early campaign “outreach,” the literal kind, has been contained.

Maybe his heroic media drawer was built too large, with global expectation now feeling the post-campaign letdown of an infatuation no man or woman can pursue in the non-coital day-to-day.

Perhaps Obama himself, aware of the acres he was dared to occupy, has sized himself accordingly. Wild expectations are kept in check.

Such extenuations are possible, even probable. Obama is a deeply intelligent man who likes to listen. He’s in the freshman year of his presidency, in the orientation phase when it pays to hear others out.

At the same time, the side of Obama that was absent from the campaign puzzle toward the end — something like an unscripted rustling of leaves — is now missing from Obama the president. His luminousness is short on spontaneity. His transmissions are graciously eloquent. He hews to unaudacious choreographers who are masters of conspicuous personal presentation, in person, on television, online. Paradoxically, they don’t like showing off.

They know that image shouldn’t be left to amateurs, who can undo years of work with a single bad move. On a global stage, a young president is an amateur.

Absent the rock star, the United States is run by an able leader who for now mixes urban activist with early Tony Blair social democracy. The world isn’t his oyster but it’s very much his to discover.

His failure to fully convince early — part of a visceral unwillingness to take up too much space — may over the years help usher in more a well-rounded, convincing and confident man, one who lets experience teach him more about the uses of presence.