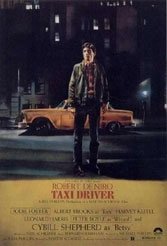 The New York City young Martin Scorsese embraced as his muse was squalid, broke and broken, as distant from 21st-century outlet stores as Mercury from Mars. What better character to ape that sickened landscape than a vulgar and disenchanted cabbie? Travis Bickle (Robert De Niro), a former Marine mentally pulverized by Vietnam, is a bitter know-it-all whose coarse passengers help him rehash a dark side he’s already memorized. Most such loners imagine their saviors as white-dressed angels, and Travis is no different: He befriends pretty Betsy (Cybill Shepherd) and tries to woo her. But Travis social skills are as grossly infected as the city he’s learned to hate. He takes his angel on a porn movie date. Her disgust is his tipping point.

A superhero transformed in reverse, Travis morphs into a Mohawk vigilante bent on tribal cleansing (“I think someone should just take this city and just… just flush it down the fuckin’ toilet.”) But redeemers also need purpose, and Travis finds one in saving a Pygmalion prostitute named Iris (Jodie Foster). Her debauched pimp Sport (Harvey Keitel) stirs up Travis’ righteous rage by reading him Iris’ menu: “Man, she’s twelve-and-a-half years old. You never had no pussy like that.”