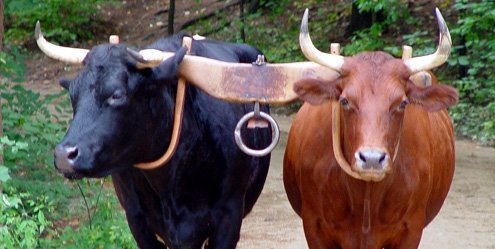 No one eats until Elio tastes the balls!
T

he only way to reach Manuela’s village is to take an unmarked gravel fork on Route 387, look out for a mountain range that resembles a human face and is known as “The Sphinx,” and then follow the road as it coils 600-meters up a granite wall. A sign in Sardinian welcomes you with a reminder that horn-honking is prohibited. The 1,400 residents and countless free-range livestock don’t like to be hurried.

I came to Villasalto for two reasons, and they seem to have intersected on this deserted one-lane road near Mount Genis. As I send Manuela and I lunging forward in a series of violent convulsions, a family stares at me in anticipation from the other side of the windshield in a twisted kind of déjà vu.

But I’m getting ahead of myself.

What started as a nervous proposal to eat pizza one night has gradually evolved into the kind of relationship that would never work in America: the kind where I’m dating Manuela, my secretary and student.

Though I’ve yet to be briefed on my English school’s co-worker/pupil dating policy, we’ve done our best to keep our budding romance a secret at work, seeing each other after class and on the weekends. Except Sundays.

Sunday lunches in Villasalto at the Mura house are reserved for family, and they aren’t optional. So when Mamma Mura called me Saturday to say that she had already put my plate at the head of the table and stuffed two kilos of ox testicles in the family freezer, I knew things had gotten serious.

“Sounds great!” I said before she hung up.

The truth is, eating ox testes did not sound great.

Thinking about it, I had actually seen people violently throwing up while trying to down them on “Fear Factor.”

I had only met Mamma Mura once previously, but had never tasted her cooking, which her husband, the town pharmacist, had said was renowned throughout Villasalto — mainly her bucolic Sardinian favorites cow brain (ciorbeddu de bacca), cheese with live larvae inside (casu marzu), and, of course, fried ox testicles (granelli). I must admit, I was intrigued.

At Manuela’s urging, I finally agreed. But only after she agreed to a bet.

I arrive at the Mura’s whitewashed villa already nauseous. The dizzying switchbacks and altitude change had caused me to prop my head out the passenger window gasping for air. Bells dangling from the necks of cattle, sheep, and goats blew through the countryside until ear pops took them away.

I follow Manuela into the family cellar where the pharmacist and Manuela’s godfather are heating civraxu grain bread in the closed brick fireplace. “Vieni to the balls!” Mamma Mura calls in broken English from the kitchen. I swallow hard and obey.

I pass around finished dishes of fried vegetables, marinated lamb, wild boar, culurgiones dumplings, and handmade pardulas, saffron cookies. Mamma Mura has been cooking since Saturday morning, but she saved the ox testes for me.

An adult bull ball extends from a man’s wrist to the end of his fingers and weighs enough to make an ox avoid running. I look away as Mamma Mura slices each testicle into meatball-sized helpings and turn back to hear them crackling as they enter a sweltering pool of olive oil, flour, and garlic. I add parsley and salt as told before Mamma Mura calls her family to the table.

I raise my head after grace to see eight pairs of eyes fixed on me expectantly.

“No one eats until Elio tastes the balls!” Mamma Mura laughs.

I squeeze Manuela’s arm under the table for courage as the first ox genital enters my mouth. It has a spongy consistency that, if not for the notion of bull sperm, would be quite tasty.

One more to go.

I put a healthy portion of lamb on my palate before downing the second testicle, winning the bet.

“I hope you’re ready,” I say to Manuela.

I excuse myself following lunch and tow Manuela by the wrist to her most sentimental possession — a rusty 1994 Citroen that left us stranded in Corsica a month earlier. I have pleaded for three months for Manuela to teach me to drive stick shift, and have been rejected each time. The Citroen is already on its last run, she says. My gear-grinding might be the nail in the coffin.

She leads me two deserted kilometers to Mount Genis where elderly women fill empty bottles with water from a spring.

“Okay, you can drive back,” she says.

Everything is going smoothly until Manuela suddenly screams, “Frena!”

I panic and stall-out. A roaming family of cattle has planted itself in the middle of the road and is in no hurry.

I try to engage the clutch, but jolt forward. I’d honk, but I can’t. Suddenly my eyes meet the bulls’ eyes. I feel guilty. I choose to wait and give them the right of way. It’s the least I can do.