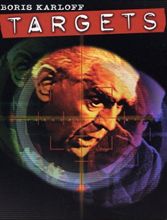 Director Peter Bogdanovich (“The Last Picture Show”) never missed an opportunity to indulge his film historian side. Here, Boris Karloff, in his final role, plays a faded horror movie star (what else) doing a series of promotional appearances at the same time that a sniper is shooting randomly around Los Angeles. The world-weary horror star, one Byron Orlock, is at first inconvenienced but gradually… horrified. Bogdanovich can’t resist concocting a climax that sees Orlock face the assassin in drive-in while Roger Corman’s B-movie “The Terror,” starring Karloff, flickers on screen. Kitsch galore, but seeing Karloff ruing the genre that made him (he’s also seen watching one of his movies on TV) is special.