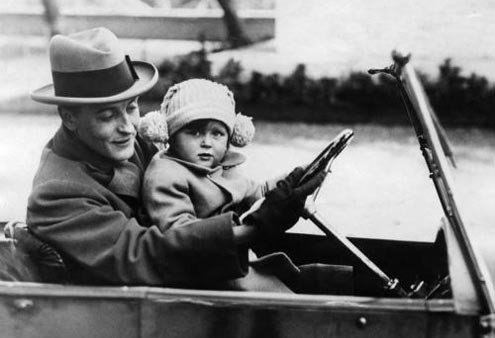 With daughter "Scottie" in Rome.
W

hat happened to F. Scott Fitzgerald in Rome on a misbegotten December night in 1924 is in the pages of his fourth and last completed novel, “Tender is the Night,” published in 1934. When Dick Diver’s affair with tantalizing starlet Rosemary ends, the spurned psychoanalyst embarks on a boozy, demoralizing crawl through the eternal city that culminates in a fight with a surly pack of taxi drivers. At the police station where he’s hauled to sort out the dispute, he knocks out a lieutenant, inciting carabinieri to beat him to a pulp:

“He felt his nose break like a shingle and his eyes jerk as if they had snapped back on a rubber band into his head. A rib splintered under a stamping heel. Momentarily he lost consciousness, regained it as he was raised to a sitting position and his wrists jerked together with handcuffs. He struggled automatically. The plainclothes lieutenant whom he had knocked down, stood dabbing his jaw with a handkerchief and looking into it for blood; he came over to Dick, poised himself, drew back his arm and smashed him to the floor.”

Fitzgerald, the celebrated, egoistic, alcoholic chronicler and avatar of America’s Jazz Age, didn’t require fictitious license to frame the scene. The real incident — “a thing,” he called it — is thought to have occurred around December 20, 1924, at the height of Benito Mussolini’s rise to power, and poisoned him against the city for good. “We hate Rome,” he wrote his editor, Maxwell Perkins, just before he fled for Capri with his wife Zelda in February 1925.

In his private life, Fitzgerald found it excruciating to talk about the dynamics of the drink-induced brawl. When he did, rage welled up. Arthur Miziner’s Fitzgerald biography reveals a disturbing 1929 note: “After I — after a thing that happened to me in Rome I used to imagine whole auditoriums filled with the flower of Italy, and me with a machine gun concealed on the stage. All ready. Curtain up. Tap-tap-tap-tap-tap.”

The beating occurred on the Fitzgerald’s second trip to Rome, not surprisingly also their last. Given their first disappointing stay in Italy’s capital in 1921, which came on the heels of Fitzgerald’s completion of “The Beautiful and the Damned” (the novel was published the following year), it is a wonder they returned at all.

The spouses fought bitterly over Fitzgerald’s excessive drinking. Worse, their swanky suite at the Grand Hotel was flea-infested. Despite reveling in the final stomping grounds of his idol, John Keats (“Tender” takes its title from Keats’s poem, “Ode to a Nightingale”), Fitzgerald found little else redeeming about the 1921 trip. “I could understand at last why the French loved France,” Fitzgerald, who did not love France, wrote afterward. “They have seen Italy.”

The 1924 trip came on a whim inspired by Zelda who had been reading “Roderick Hudson,” one of a handful of Henry James works set in Rome. It featured a fatalistic cast of American expats (foreboding presumably lost on or ignored by the Fitzgeralds). The climate for their November arrival could not have been worse. The assassination of socialist leader and Mussolini opponent Giacomo Matteotti in June, probably at Mussolini’s behest, triggered a wave of Fascist militia violence that peaked in Rome the December of Fitzgerald’s beating. The next year rang in more delirium as Mussolini seized the role of Il Duce and let his Black Shirts roam free to wreak havoc. It was also a Roman Catholic Holy Year, in which Catholic faithful are invited to make pilgrimages to the city. In posthumously published sketch, “The High Cost of Macaroni” (1954), Fitzgerald suggested that Holy Years brought out the worst in Italians:

“Only one year in every twenty-five is Holy Year — and we had blundered right into it. To the Roman business man, Holy Year is that period when he counts on making enough profit out of foreign pilgrims to enable him to rest for twenty-five years more.”

Fitzgerald’s disdain for all things Italian (“Italy depressed us both beyond measure — a dead land where everything that could be done or said was done long ago,” he wrote in 1925) eventually burgeoned into full-blown racism. Consider an ugly extract from a June 1921 letter that Fitzgerald, then 25, wrote to the American writer and literary critic Edmund Wilson:

“Rome is only a few years behind Tyre and Babylon. The negroid streak creeps northward to defile the Nordic race. Already the Italians have the souls of blackamoors. Raise the bars of immigration and permit only Scandinavians, Teutons, Anglo-Saxons and Celts to enter.”

Years later, after Fitzgerald became estranged from Zelda, who by then was being shuffled in and out of mental institutions with schizophrenia, and after the worst of his decadent living and egoism had passed, the author amended these problematic views. “I hated Italians once,” he wrote in 1935, five years before his premature death at 44. “Jews too. Most foreigners. Mostly my fault like everything else. Now I only hate myself.”

Though that December night in Rome loomed inexorably large, Fitzgerald’s Roman winter of discontent was not a complete bust. While he and Zelda moved between the Hotel Quirinale and the Hotel des Princes (the Fitzgerald’s were disenchanted by both), he revised the galley proofs of his seminal novel, “The Great Gatsby” (1925).

The couple also began mingling with the cast and crew of Hollywood’s ancient Rome epic, “Ben Hur.” The silent film, starring Carmel Myers and Ramon Novarro, was being shot on an enormous set along the Appian Way. A fictionalized account of the movie appears in “Tender.” “Dick —we’re making the ‘Grandeur that was Rome,'” Rosemary tells him in the lobby of the Hotel Quirinale, “‘at least we think we are; we may quit any day.'”