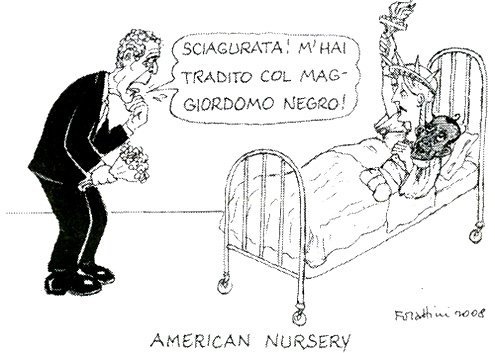 “Young, handsome and tanned” is how Berlusconi jokingly chose to describe Obama while on a state visit to Moscow. The remark was less egregious than other bumpkin colloquialisms accumulated over the years along Berlusconi’s coarse Via Crucis. Called down, he ragged, as he always does, on the humorless media (he’s not entirely wrong). He’s better than any leader in the world at doing an indignant “why me?”

But if Berlusconi is vulgar, the Italian left is crass. True to form, it used the remark to revive are what by now knee-jerk attacks Berlusconi’s parochialism. Longtime sniper La Repubblica called him a racist disgrace, a vulgar bigot, the worst Italy had to offer. Walter Veltroni, who leads Italy’s opposition center-left Democratic Party, demanded that Berlusconi apologize to Obama.

To which in so many rude words Berlusconi responded, “Get a life.”

And this time he’s right. If a truly nation gets what it deserves, or more to the point what it elects, Italy continues to choose Berlusconi, opulent warts and all.

He won a decisive victory in April elections after the bickering center-left squandered 24 months of rule and burned itself at a very public stake. After working nearly a decade to dislodge Berlusconi, it followed collective suicide with a nifty John McCain. Newly minted leader Veltroni wasn’t beaten but crushed.

Not before he looked elsewhere for inspiration. Veltroni, already an Obama fan, tried piggybacking on “Yes, we can,” translating it into Italian in hopes of imitating Berlusconi’s infinitely more successful 1994 Forza Italia!, a soccer rally cry that he transformed into a winning party. No such luck for overmatched Veltroni.

But Obama-mania didn’t fade. His candidacy helped the left illustrate America’s genius for open-mindedness at the expense of Italian inadequacy, tutored of course by Berlusconi. If the United States can change, why not Italy? If America promotes tolerance, why is Italy its own worst pox? Berlusconi facilitates this self-flagellation. He’s been giving the Italian left its raison d’être since the mid-1990s. Without his errors the left is lost. It’s perverse Latin symbiosis perfected.

Berlusconi knows Italy’s dependence on his unscripted outrageousness and feeds it punctually. He loathes reporters, intellectuals and “Communist” judges. He’s more comfortable among Russian oligarchs, who understand both his breeding and roi soleil manias.

Yet Berlusconi is also unwaveringly pro-American. As the left punched out George W. Bush, Berlusconi was a pilgrim to Crawford, Texas, pledging allegiance and wearing a cowboy hat. His support for the United States is Liberation-vintage and genuine (dating to his youth).

The left’s star-spangled pledge is anything but. Instead, it rides the coat-tails of Obama’s global coolness. It siphons from American history to substantiate domestic gripes. It conveniently sets aside nearly a decade of Bush-bating. Fickle and rudderless, it’s glad to let bygones go solo.

This might satisfy all sides if self-serving marriages weren’t as unsavory as antediluvian remarks. The hypocrisy is about even.

Had the self-deprecatory Obama called himself “young, handsome and tanned,” many might have seen a man poking fun both at himself and racial archetypes. Instead, he called himself a “mutt.” Imagine Berlusconi calling Obama a “mutt.”

It’s true that Berlusconi came into his own when racism and sexism were standard fare in Italy (some argue they still are). But his comments have always been freewheeling and rarely pointedly cruel. Right of Berlusconi, by contrast, is his Northern League partner, which considers bigotry an obligation. They walk the walk.

Illustrator Giorgio Forattini, who over the years has punctually insulted Italian politicians (and belongs to Berlusconi’s septuagenarian generation), actually one-upped Tan-gate with a cartoon published in Florence’s La Nazione under the heading “American Nursery.” It showed a man bringing a woman flowers while she lies in a hospital bed with their newborn child. The wife is Lady Liberty while the infant is a pre-Renaissance version of Barack Obama. “You disgrace!” says the man. “You cheated on me with the black butler.”

Unions representing typesetters and printers banged the drum in protest. Satire shouldn’t violate basic civility. And yet it does.

“God save us from imbeciles,” remarked Berlusconi to placate the uproar. Tempting as it is to suggest he look into the mirror, it’s also too easy. Berlusconi is nurtured by those who most hate him. He’s is the product of an opportunistic environment that encourages shifting alliances and sudden shifts in mood and loyalty. To counter this he is loyal only to himself. Unlike the left, that at least gives him one person he can count on.