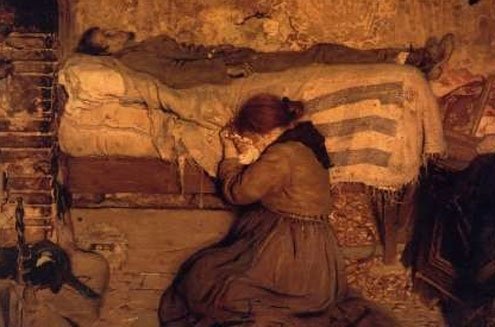 Paride Pascuci's art was rooted in the existence of malaria-generated woe.
T

here’s a story in Santa Fiora about a witch who lives high above the town in a rocky mountain. At night, when the children are sound asleep and the parents are watching Italy get ungraciously booted out of the World Cup, she sneaks into their rooms.

As sinister as it sounds, she’s not there to hurt them. She doesn’t want to kidnap them or gobble them up or even steal their dreams. All she does is twist their hair into knots before disappearing into the night. In the morning, the children wake with hair that is too painful brush, and, I always assumed, the witch gets her kicks.

It’s a tale fit for the streets of Santa Fiora, a Tuscan town whose very foundations are said to have been laid by industrious, 13th-century Germans shepherds. The shepherds, constantly under attack from barbarians and pirates, built the city’s first walls.

Generations of bewitching tales wind through Santa Fiora’s cobblestone streets and hidden Renaissance garden, where the town’s counts and countesses once lounged among the hydrangeas.

Every Maremma town has its own handful of stories. They are what make the province so much more than just an undiscovered corner of Tuscany with delightful country views and a sense of the “real.”

It’s a side — that of local lore — which tourists never get to see, but one I find myself retreating further into the longer I stay here.

Take the seaside town of Castiglione della Pescaia. Before winning Italy’s most beautiful beach contest in 2014; before Italian author Italo Calvino found his muse for the 1983 novel “Palomar” in its cedar forests and Sophia Loren found her multi-million euro beachside residence, the medieval town was a hag’s hunting ground.

The witch, scorned by her kind and betrayed by some fickle man, waits for children and unknowing passersby in the swamps of Diaccia Botrona on the town’s outskirts. She has no intentions of letting them go with a few inconvenient knots. No, with one look she burns them with a gaze so maleficent it brings fever and death. She is the hag of malaria, a metaphor for the Maremma’s dirty little secret.

Those of us in the once-diseased Maremma are forever immortalized in Dante Alighieri’s “Divine Comedy” as Corneto, a place where savage and wild beasts and hideous Harpies make their nests. Suffice to say, Dante had no love for this sickly territory.

It’s hard to blame him. Malaria ravaged the province for the better part of 500 years. In 1861, the average lifespan of a Maremmano was 24. Courtesy of successful drainage and systematic campaign to eradicate the disease, the Maremma has all but forgotten its malarial past. The stories, however, endure.

Grosseto’s magnificent Parco della Maremma, completed in 1975, was major part of the anti-malaria effort. Its intricate system of trees was part of an immense reforestation effort that began in the 18th century. The goal was to plant trees that would absorb the stagnant marsh waters on which malaria mosquitoes thrived. Since then, the park has become the region’s most spectacular nature reserve.

Within its boundaries are the ruins of the Bella Marsilia castle, where Margherita, a 16th century princess with red hair and Snow White-like beauty lived. She was kidnapped by violent pirates, who — legend aside — really did kidnap thousands of Maremmani and sell them to merchants in North Africa and Constantinople.

Margherita’s extraordinary beauty brought her to the harems of Suleiman II, Sultan of the Ottoman Empire. Suleiman was besotted with the violet-eyed beauty and keep her captive until her death. Legend says her ghost still haunts the nature reserve with laments of stolen youth and unforgotten horrors.

Most of the Maremma’s tales end like this. They are bitter stories that warn of terrors just beyond the front door. Salvation always comes too late.

For most of recorded history, Maremmani faced a hard and short existence working on land they didn’t own. If malaria didn’t get them, it was brigands, tyrannical landowners or Garibaldi’s reckless journey to unite Italy.

Manciano painter Paride Pascucci captured the pain of the 19th century in his paintings. They are snapshots of an illiterate time. But Pascucci also captured the “carry on” spirit of its people.

The Maremma has its own Robin Hood, feared brigand Domenico Tiburzi. It is the birthplace of a utopian society and its self-proclaimed charismatic second-coming-of-Jesus Christ, David Lazzaretti, a local cult leader killed by carabinieri in 1878. It has offered safe harbor to everyone from Italian Jews to resistance leaders and partigiani.

The stories told around firesides to scare children were also a quiet way of giving meaning to their heritage. Inspiring them with St. George, who freed Montemerano from a dragon, and a mysterious fog that saved Arcidosso, a town near Montalcino, from World War II bombings.

No one really reads these stories to their kids anymore, but I still like pulling them out every so often to bore my family or (with luck) inspire another intrepid traveler.

Without them, the Maremma is still spectacularly beautiful, enthralling, engaging, but it’s as if some of its color if missing. Things are just a little duller and a little less enchanting.