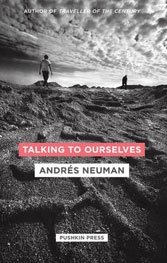 By Andrés Neuman, translated from the Spanish by Nick Caister and Lorenza Garcia

Death and dying are in no one narrator’s sole grasp, so Neumann spreads the madding wealth in this rendering of cries and whispers. It is the story of three people, Lito, a 10-year-old boy, Elena, his mother, and Mario, his dying father. His disease rampant, trucker Mario decides to fulfill Lito’s wish and take him on a long haul drive in Pedro, his Peterbilt truck. Elena, a writer and teacher, remains at home to fret, to ponder literature, to contemplate life, and conduct an affair that by her standards seems depraved (with her husband’s doctor, no less). But hers is a form of pre-grieving — “I want to avenge myself on my own flesh…” and “…I want to be humiliated to the point where I no longer care…” — a kind of feral recklessness pollinated by so very many suggestive words (“…we seek out the books we need to read,” she says, and her snippets come from the likes of Roberto Bolaño and Richard Ford, Flannery O’Connor and Lorrie Moore, Virginia Woolf and John Banville).

Elena is Neumann’s conscience in what is a deeply thoughtful but unpretentious reflection on how the sides of a triangle — mother, son, father — come around to the reality of a terminus. “Bringing up a child and caring for a sick person have this in common: both require an energy that is not really yours.” So Elena must forage for it.

Neuman, very much a Spaniard though born in Buenos Aires, gives Elena a perspective that transcends femaleness. She exists to grasp both the devout and frivolous sides of grief, empathy and ego at war, neither “winning,” since there’s no such thing. Here then is a small but admirable book that treats death with simple but intellectually elegant honesty, offering a conversational cadence that is both reassuring and disquieting. “Grammar doesn’t believe in reincarnation,” says Elena. “Literature does.”