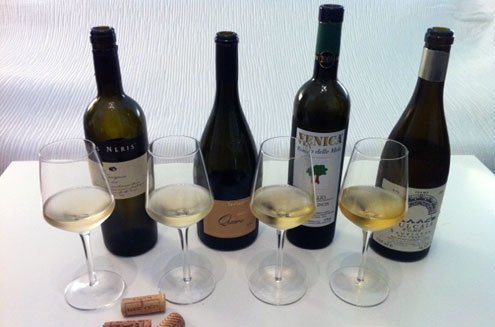 The author's Italian choices, lined up by color.
A

s I start my ninth year in Italy some people have asked me if I’ve gone native, and when it comes to wine maybe I have. “Native grapes,” with their quirkiness and inherent bond to a specific location, fascinate me. Occasionally, though, an “international variety” grabs my attention, and this month it was sauvignon blanc.

I was visiting Boston in early fall when my neighbors Wendy and Kristen brought over a bottle of New Zealand Cloudy Bay sauvignon blanc for an evening aperitivo. The grapes grow in loamy soil near the Wairau River, where sunshine is abundant but the temperatures cool. The resulting wine is typically a transparent straw yellow with bright acidity and grassiness. It has light citrus aromas and flavors, grapefruit in particular. On a steamy evening the wine went down almost like lemonade.

Kristen asked me what I thought.

I hesitated. “It’s fine. It’s just different from the sauvignon blanc that I’ve tasted in Italy.”

“No,” I told her. “It’s a grape variety that’s especially sensitive to terroir.”

Now it was Wendy’s turn: “What does terroir mean anyway?”

“It’s a French word that refers mostly to the effects of natural phenomena, including geography, climate, soil type, climate… but it’s also come to include human decision-making. How to grow the grapes, when to pick them, how to make the wine, whether to age it, and so on…”

Kristen asked for a specific example.

“By way of background, sauvignon blanc is a French grape variety that originated in Bordeaux where it is often mixed with sémillion, most famously to make Sauternes. Somewhere back in the 18th century, it was crossed with cabernet franc to make cabernet sauvignon. But now the French epicenter for 100 percent sauvignon blanc is around the towns of Sancerre and Pouilly-Sur-Loire in the central Loire River Valley.”

“Two hundred miles east of Tours and 200 miles south of Paris. The soil can be gravely limestone, chalk, flint, or some combination of all of them. The grapes are usually fermented in steel containers, no wood.”

Kristen took another sip from her glass. “So how is it different from this New Zealand wine?”

“The Sancerre and Pouilly from gravely limestone soil tends to be drier with lots of minerality and less grassiness. The aromas and flavor of citrus or white fruit are there, but not as dominant. And the wine from vineyards with flinty soil produces a distinctive smoky aroma in the wine, like the smell of a striking a match or gunflint. The fruitiness is still there, but again, less noticeable. The Pouilly wine from flinty soil is even called Pouilly Fumé, which translates to Smoky Pouilly.”

Wendy nodded. “Now I’m starting to see why the New Zealand sauvignon blanc wasn’t that interesting to you. What about California? Do they make it out there?”

“They do, but back in the 1960s when Robert Mondavi first tried to sell sauvignon blanc wines, they weren’t popular. The terroir didn’t give the wine any remarkable characteristics.

“To solve his marketing problem, Mondavi invented the name Fumé Blanc, Smoky White. There was no natural flinty, smoky aroma in the grapes but he added a semblance of it by putting the wine in oak barrels.”

“What about in Italy?” asked Kristen.

“Since sauvignon blanc is a late budding, early ripening grape that thrives in cool but sunny climates, the best Italian versions are from northern regions: Alto Adige and Friuli-Venezia Giulia. The taste definitely varies with the terroir. Maybe you’d like to taste for yourselves?”

I scouted Boston for Italian and French wines made entirely with sauvignon blanc but could only find French ones: Lucien Crochet “Le Chene” Sancerre 2009 and Henri Bourgeois “La Chapelle des Augustins” Sancerre 2010. I invited Wendy and Kristen back over to try the wines. The Italian recommendations would have to await my return.

Both were astounded at how differently the two French wines tasted. It was the same grape variety, same vinification methods, nearly the same age, same appellation (Sancerre), but different soil. The Lucien Crochet was lighter and meant for drinking within two years. The Henri Bourgeois by turn had a flinty, smoky flavor, and while good when young, it could be aged five-to-seven years. Both were delicious with a classic pairing of goat’s cheese and shrimp (they’d also go well with white meat or fish).

Back in Italy, I can now give Kristen and Wendy the suggestions I promised. I’ve lined up my chosen Italian sauvignon blancs by color, from nearly transparent to amber, to better show the effect of terrroir: