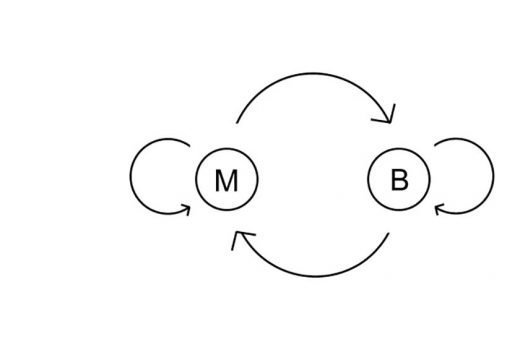 Clear? Not necessarily. An example of a computer-generated graphic using semicircles and arrows to visually "explain" the nature of the interaction between infant and mother.
O

ver time, I’ve found it increasing difficult to decipher the illustrated graphics inserted into books to help readers to better understand a variety of concepts. This in turn has made me wonder if my mind’s ability to comprehend images might be gradually slowing down.

One in particular, used to illustrate the mutual influence between mother figure and infant, completely stumped me (see above).

I pondered how to make sense of the drawing’s semicircles and arrow msrkers until I realized what was wrong; the image had been generated by computer software unconcerned with the human side of comprehension. Despite all the well-intentioned curves and arrows, any actual sense of direction was lost. While the right-angle arrowhead appeals to our symbolic notion of something being pointed at, the mind doesn’t perceive the illustrated pointer as moving in space. The lines and semi-circles appear to go where they’re intended to, but, since they’re static, lack any real direction. Aside from the symbolic pointing of the arrow, you’re on your own to figure out what all this represents.

After repeated frustration, I found myself asking a simple question:

Why not do these drawings by hand? They’d be far from perfect, of course, but at least they’d communicate concepts in ways friendlier to human perception.

Vitality is life itself, and movement itself, even if only to breathe.

My 25 years of teaching facilitated testing out my hypothesis. I’ve given some 80 exams, many of which instructed students to make a limited number of selections, as in, “Answer only 3 of the following 5 questions.

Without fail, each of those exams has seen a couple of students insist on answering them all. I tried using bold type and a larger font to make my point: “Answer only 3 of the following 5 questions.”

Only when the author turned to handwritten pointers, did her students follow her exam instructions.

It did no good. A few students inevitably and consistently ignored that instruction.

The “why?” behind all this came to me suddenly as I was trying to solve the riddles of the graphic I mentioned earlier. Type is anonymous. Arrows, lines, and semicircles, no matter how precisely drawn, are lifeless. They just sit there without actually bringing the viewer with them.

This gave me an idea. A few years ago, before photocopying the test, I began writing the crucial part of the test instructions in longhand. Since then, not one student has defied the instructions and answered all the questions.

Attached to a door in my workplace is a printed sign that says, “Use other door.” But I invariably use that door. The sign just doesn’t register. It hangs there in the same way the printed instructions on the test appear, but don’t. The sign, like the mass-produced print, doesn’t speak “human.”

Ironically, I made all these connections as a result of what I’d learned from the very book in which the indecipherable graphic appeared. The author, infant researcher Daniel N. Stern, followed a theory that emphasized the many “forms” of human vitality. He focused in particular on the importance of vitality as it’s formulated in communicating with infants.

In “Forms of Vitality: Exploring Dynamic Experience in Psychology and the Arts,” psychiatrist Stern, who spent years studying infant development, probed the affective meaning of vitality early in life.

Vitality is life itself, and movement itself, even if only to breathe. The forms this vitality takes reflect the shape and contour of our physical movements. Everything we do carries our own personal signature. Even our literal signature is an expression of a form of vitality. Imagine the difference between a robotic voice intoning each syllable in the same way, and how that differs from the voice tone of an actual human being.

Forms of vitality are the contour of an emotion, its movement, or a tone of voice.

Speaking of signatures, even as a child I was interested in handwriting: the physical act as well as the feel of pen on paper, shaping the letters. I was also intrigued by gestures and the question of why we all write differently.

So I started trying to copy people’s writing. I write with a large and decisive hand, so trying to copy someone with a delicate fine hand was a revelation for me. As a kid engaged in the act of copying I remember thinking, “So that’s how he feels.” I’m not talking here about “handwriting analysis,” nor am I convinced that a particular angle or loop has a specific and universal meaning. What interests me is how the whole flow of one’s writing, like tone of voice, expresses an individual’s character.

Forms of vitality are the contour of an emotion, its movement, or a tone of voice — each as personal as our signature. It’s how we recognize one person from another at a distance. It can be their stride or their particular way of moving. To describe them, Stern uses many musical terms: legato, staccato, crescendo, diminuendo. He also uses words like explosive, soft, decisive, and so on. Everything we do is done in certain ways that depend largely on context. Overall, our movement is our signature and our sign of life.

I’m convinced that a well-written hand-designed sign conveys more of its intention than the perfect anonymity of one done by even the best of computer programs. A good illustration drawn by hand conveys more than a flat geometric image. The human hand conveys what the human voice and body seek to. It’s the difference between a music box rendition of Bach and that of a fine pianist, a difference so profound it defies words.