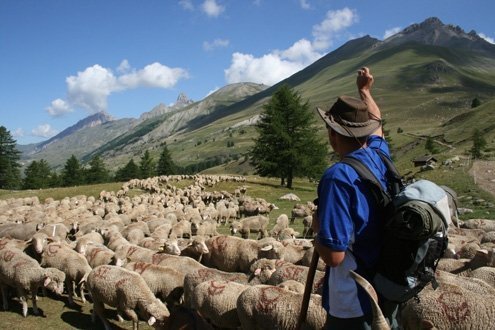 Transumanza is the moving of herds from higher to lower altitudes and back, helping to "cheese up" their diets.
I

love anything inoculated with spores. I could talk about (and eat) blue cheeses all day. Lots of recipe ink has been spilled on crumbly Roquefort and creamy Gorgonzola. But one thing I’ve learned in my Italian blue cheese research is that it’s a religion. You believe or you don’t. Some salivate; others plug their nose. There’s no in between.

For non-nerds, blue cheese falls under the erborinati, or blue veined, category. The cheeses possess varying degrees of texture, sharpness and flavors depending on milk, spores and age.

The traditional moldy vein universe hosts two main currents: creamy and crumbly. Creamy blue cheese is often younger, which also makes it moister, with a higher percentage of butterfat. Some creamy blues are made richer through the addition of cream or mascarpone (curdled cream) to the curds. The result is a luxuriously smooth cheese with a texture similar to Brie and Camembert. A perfect example is young and creamy gorgonzola dolce (sweet), usually milder than the more aged and crumbly gorgonzola piccante (spicy).

Crumbly blue cheeses have less butterfat and are aged longer. Aging minimizes the moisture content and creates a denser, more friable curd that allows blue-green molds to vein deeper throughout the cheese, concentrating and intensifying its typical flavor.

Historians maintain gorgonzola — Italy’s pre-eminent blue cheese — was first made in its namesake town of Gorgonzola, not far from Milan, in 879, and first known as stracchino di Gorgonzola or stracco verde — stracco in Milanese dialect means tired, a feeling shared by shepherds who stopped in Gorgonzola on the way back to their farms after the summer transumanza (transhumance is the moving of herds from higher to lower altitudes, and vice versa, for better pastures).

Others insist gorgonzola was born in tiny hamlet of Pasturo in the nearby Valsassina valley, a cheese producing area with an array of caves whose steady 12C temperatures and high humidity were ideal for the cheese aging process, blue cheese in particular. Whatever the story, Gorgonzola production has always relied on autumnal milking — nourished by the summer grazing diet found in high altitude pastures — and bacteria. Milk is heated and mixed with spores from penicillium glaucum or penicillium roqueforti molds, depending on the desired result — creamy or dolce, crumbly or piccante — after which it’s left to curdle, cut, squeezed and finally put into moulds that sit very briefly in a hot room before being moved to a cold, humid cellar for two to three weeks.

What happens next is what makes blue cheese blue: the poke. Large metallic needles penetrate the cheese on each face and all around the drum. That’s it. The air, humidity and low temperatures that naturally permeate the holes do the rest.

The oxygen awakens the dormant penicillin spores in the curds, slowly developing edible molds with characteristic blue-green veins. The process usually takes three weeks to a month and accelerates the maturation of the cheese. After two months, Gorgonzola is ready for ravaging.

Gorgonzola was bestowed DOC denomination in 1955, and a strict rulebook demands production according to very specific procedures and using milk only from Lombardy and Piedmont.

Gorgonzola has many large and illustrious makers, but my favorites are the cheeses that come from artisan hands. Some of these are also cattle farmers. In these small businesses, owner and working hands dine at the same table on Christmas and Easter. The level of mutual respect and shared passion is staggering.

I particularly like Italian blues with unconventional roots, particularly those made by small family-run dairies in remote pasturelands. Some of these producers create intriguing twists.

For example, Gorgonzola made with goat’s milk instead of cow’s milk is delicious. In Tuscany it’s called blu di pehora (that’s how it’s pronounced locally — Tuscans have a strange relationship with the letter “c”). The 60-70 month-old crumbly blu di pecora is a delicious version of Roquefort, and you can find it at De’ Magi in Castiglion Fiorentino.

Another favorite is a kind of semi-aged blue that matures covered with mixed frutti di bosco (a classic assortment of blackberries, blueberries, raspberries and wild strawberries) and rose petals. It’s ridiculously good debauchery and a bizarre surprise for both nostrils and taste buds. In Rome I find it only at my favorite cheese-monger, La Tradizione.

Believe it or not, bufala bovines don’t just give us milk for mozzarella. In Amaseno, a small town south of Rome in the bufala-rich Ciociaria countryside, I tasted a delightful blu di bufala at

Agricola Emme in Piglio, which produces local wine and cheese. Ask Anatolio Piccirilli to take you on a tour to meet the buffalos before doing tasting their products.

In Lodi, a gorgonzola-making town south of Milan, I tasted a local specialty called torta di noci. The nut cake is composed of creamy Gorgonzola and mascarpone layers studded with whole walnut meats, a stunning flavor combination. It’s made only between the end of October and March. You can find very good torta di noci at Caseificio Carena in Caselle Lurani, 15 kilometers out of Lodi.