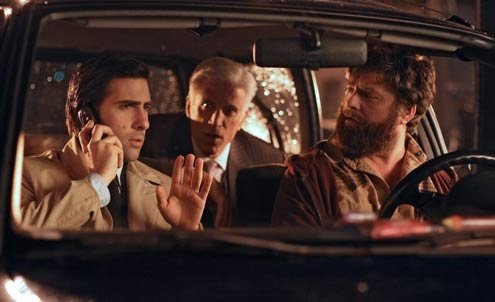 TV shows increasingly depend on interrupted characters.
I

’m on the phone with a friend discussing the end of the print edition of the Encyclopedia Britannica, whose Italy World Book entry I’ve compiled for the last six years. She wants to know what I think.

Before I can answer, her mobile phone rings and she apologizes. It’s a call she has to take. I wait. Back on the line, she wants to know where we left off. Britannica, I say. But soon her phone rings again. Resuming a second time the topic has been superseded by the distracting contents of the latest call, which she’s eager to share. The Britannica question has lost priority and immediate relevance, replaced by something seemingly more urgent. She’s moved on.

At night, after a long day of translating or editing, my hired task, I watch American TV programs. Most are longstanding crime shows whose 45-minutes are silly enough to provide relief from the many things that aren’t. The characters on the shows reflect a pantheon of American archetypes, including square-jawed men and diet-sculpted women. The dialogue is endearingly flimsy, as are some of the plot lines.

That’s assuming the dialogue is continuous, which these days is rare. Like my Britannica friend, my fictional ones are increasingly pulled out of rooms by phone and text interruptions. Sleuths and crime-solvers, once the most unimpeded of fictional characters, are at the plotted mercy of incoming communication, which all must take in and absorb.

But incorporating once-taboo fracturing into the natural order of linear speech is unwitting terrorism. Unconsciously, people increasingly rely on their smartphones not only to make and receive calls but also to make available the drama of interruptions, a kind of expectation of disruption. As a result, interruption turns subversive, acquiring the status of secession from the thought process, whether in tone or subject matter. The seeing through of a conversation matters less than being available to instantly break away from it and enter into a potentially new and unrelated narrative.

At its core, multi-tasking is a one story-shattering process that some handle better than others, with the more disoriented assigned one of many postmodern disorders.

In fairness, human conversation that began with “a” never necessarily arrived intact at “b,” but until recently the virtuousness of the effort mattered enough to associate any interruption with sabotage, which is what society once labeled rudeness. Since poised speech, like formal dance, required feeling and effort, cutting into the steps was seen as detrimental (if not insulting) to speaker and listener both.

What I had intended to tell my Britannica-inquiring friend was that a print encyclopedia required not only concentration, which is time, but also a willingness to find, which is persistence. Similarly, reading a paper newspaper forced the eye to glance at articles before focusing on those of interest, as a result helping to hone the general interest mind.

Britannica is gone not just because the cheaper online universe has supplanted the printed word, but also because the pondering on which print was founded has been replaced by bursts of intelligence as out of focus as they are luminous. As interruption becomes life-affirming — as in, “I have to take this therefore I am…” — attention span melts away, and with it the responsibility for completing thoughts. No wonder the pause itself is pitched as a waste of time or lost time, a cultural irony backed by smartphone advertising.

When a society that once advertised focus and attentiveness as the marrow of intelligence makes fractures acceptable, if not the norm, the need to formulate whole thoughts can turn intellectually and even neurologically unimportant. Conversational progress and coherence, disconnected by choice, lose their affinity.

“Physical books slow us down — we need to slow down,” wrote a retired English professor, ruing the Britannica decision in The New York Times. But it’s more than that. We’re not just speeding up but also encouraging our wondrous machinery to rationalize a day-to-day that depends less and less on the value of written and spoken follow through.

While the tribes of the fractured carry with them the most sophisticated receiving and sending equipment ever devised by man, life among them means signing off on tendencies destined not only to devalue what the good professor called slow, physical books, but also to undo the philosophy behind spoken sentences. That, more than Britannica folding its book tent, stains the horizon’s smartest dreams.