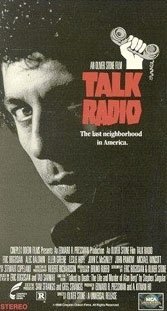 Talk radio cranked up the pitch of 20th-century American media. Absent reality TV and cyberspace, with reader letters to daily newspaper filtered and condensed, radio got the role of big nasty, presaging a far greater loudness. What began as religious lecturing (Charles Coughlin in the 1930s) culminated in the freewheeling vulgarity of Howard Stern and his ilk.

Director Oliver Stone, a snapper up of then-unconsidered trifles, found a perfect creative copilot in actor and playwright Eric Bogosian, whose off Broadway “Talk Radio” lit up Manhattan in the late 1980s. Together, they produced a vital piece of media literature that can serve as a prescient companion to films such as “Network.”

Ranting Cleveland shock jock Barry Champlain (Bogosian) is about to take his late night show national. As the stake rise, so does the fraying of the line between outrageousness and hysteria. Champlain’s personal and showtime worlds soon collide, on-air rage indistinguishable from emotional despair. “Barry Champlain,” he says, “is a nice place to visit but I wouldn’t want to live there.”

But live there he does, and Stone bites into the troubled Champlain like a rare steak. The radio booth is made into a vessel for a volatile morality system in which antic and lunatic abut. Bogosian roars and bleeds for Stone’s mercilessly focused camera. “I should hang. I’m a hypocrite. I ask for sincerity and I lie. I denounce the system as I embrace it. I want money and power and prestige: I want ratings and success. And I don’t give a damn about you, or the world.”

Bogosian based portions of the story on Alan Berg, a Denver shock jock murdered by white supremacists in 1984. Despite Stone’s prolific output, this is among his fiercest and most intimate films.