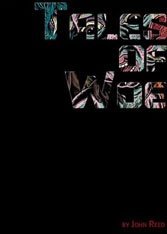 Old lines between visual art and the written word have been changing for years. Think about the works of German writer W.G. Sebald, with their photo illustrations. Or the graphic novels, which aren’t really novels, of the late Harvey Pekar. In nonfiction, Joe Sacco’s brilliantly drawn and carefully researched depiction of two Palestinian massacres in Gaza of the 1950s is one of the more powerful testaments to postwar Middle East history.

Novelist, John Reed has created yet another new genre: dry newspapery prose (in different types of print) fused with graphic graphics to reveal the eerie similarity between cartoon horror and real life.

Tales of Woe is a mysterious-looking book, lurid eyes and twisted mouths pop out of the title letters on the front cover. In place of dreary advanced praise and an author photo are cartoonish descriptions of the woeful tales inside: “True Stories of undeserved suffering. Spectacularly Depressing. No one gets their just desserts.”

The 25 stories include the impressively Flannery O’Connor-like “Out of the Frying Pan, Into the Freezer, And a Cold-Served Dish of Unjust Dessert,” about a body chopped into pieces and refrigerated. There are also killer baboons, elephants, and grizzlies (director Werner Herzog’s “Grizzly Man” retold). Children swim in ponds made rainbow-colored from carcinogenic dye factories. Gangsters bury dead girls in the woods until they get lazy and cover them with brush instead. Though some tales pack more wallop than others, each of them is a little funny and very entertaining. No dour desensitizing tragedies, no newscasters piously shaking their heads: we get to enjoy the spectacle of real life horror, generously illustrated with titillating graphics by artists including Elizabeth Alba and Patrick McQuade.

Outside its iconoclastic charms, the book also raises serious questions. Is the only way to deal with the lurid to make it a cartoon? Are we so bombarded by horror that we lose our moral compass?

Reed has found an imaginative, eloquent and even funny way of expressing outrage about human behavior without sounding self-righteous or pedantic, and that is truly an accomplishment.