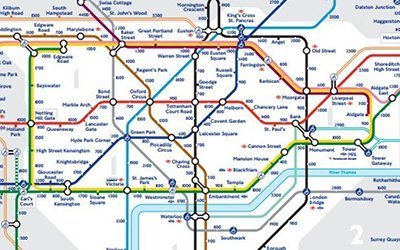 The underground: a sprawling game of shoots and ladders.
I

recently traveled to London just short of my 28th birthday. The first time I visited the British capital I was a few days shy of 21 and a college junior spending a year abroad in Bologna.

At the time, we packed pop-tarts to save food money and ended up staying in a hostel that merrily ushered swells of icy air into our bedroom at night. We slept with wooly hats and boots and winter coats zippered to our chins.

This time, I was perilously close to 30 and I no longer considered Kellogg pastry strudels a balanced meal. I was also a seasoned city-dweller, a longtime inhabitant of the eternally lovely yet cranky Rome.

But London, I quickly realized, made my Roman life look surprisingly meek and provincial.

When we arrived, my sister and I learned that our original Airbnb rental room’s heater had unceremoniously thrown in the towel, leading our host Constantine no choice but to upgrade us to one of his luxury apartments on Carnaby Street (Constantine was a muscled, Greek-American whose Whatsapp photo showed him in a sparse turquoise speedo).

Unlike our home in Rome, which had a 1970s feel, a great-grandmother’s love for all things floral and all the functionality of a Fisher-Price playhouse, this space was brand new with a widescreen TV mounted high on the wall (I hadn’t owned a TV in ages) and a table that folded out of the wall for what I imagined were spontaneous dinner parties. In the morning, I reveled in locking my apartment door, hoping that those at the adjacent outdoor cafe believed that I actually lived there.

The food in London was varied and exotic too, and I gorged on curries and tapas and tacos, along with rich steak pies and golden filets of fish and chips with mushy peas, greedily washed down by an order of vanilla ice cream and sticky toffee pudding. I did not miss pasta.

The underground enthralled and unnerved me, a sprawling game of shoots and ladders. I initially demurred, preferring the ease of taxis before finally acquiring my own Oyster card.

Even the men were more interesting, I thought, and far more plentiful than in Rome. There was at least one attractive man at least every place I went. I was 99.3 percent sure I’d have more luck finding my soulmate here than in Rome (the last time I’d been kissed was January 2016). My friends, both the London transplants and the expats, shone with London glamor. Allie, a high school pal, met us for dinner with her new fiancé and her sapphire and diamond engagement ring. We waited outside in the line (queue?) for our reservation and sipped sherry served in sleek shot glasses. Her salary at least quadrupled mine, and she lived in a chic part of town. Phil, her soon-to-be-life-partner, gazed at her mistily. Gloria, my best friend from Bologna, had been transformed from a brooding language student into a bubbly pastry chef, with impressive English. She liked peppering her speech with “for fuck’s sake!” and “c’mon mate!” She had also mastered the art of the perfect, penciled brow since we’d last met.

One evening, my sister and I went to see an opera at Covent Garden, the title role sung by yet another friend. With an artist’s discount, we paid 15 pounds instead of 150 and smugly ventured backstage at intermissions. Later, we feasted on club sandwiches in a nearby bar and drank Mojitos. “Maybe we should just move here,” my sister said as we retired to Constantine’s apartment for the last time. She was equally besotted. “Let’s just look for jobs and go.” Yes, I agreed, let’s. I wondered where my future London lover was right now, and what he was doing — maybe bartending to help pay for his master’s degree, or fast asleep, or out listening to jazz. I’m sure he’d be perfectly nice, but I knew, ultimately, we’d never meet. After all, I’m a creature of habit.

I’ve been back in Rome for weeks now, and I’ve yet to google jobs in London. My only lingering souvenir is a now half-empty bag of Cadbury chocolates.