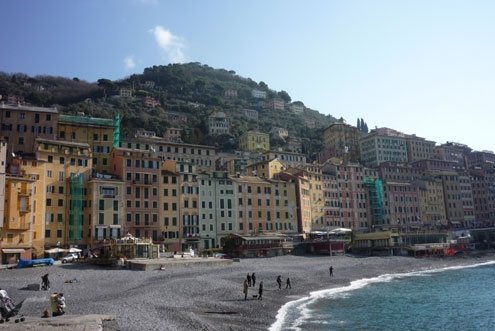 Camogli by the sea. Photos by Andrea Smith.
T

he Italian Riviera curls around the Liguria coast on the Mediterranean Sea. It sits with its back to the mountains. Camogli, a small town on the Golfo di Paradiso and about 20 kilometers east of Genoa, snuggles into the western curve of the promontory of the Parco Naturale Regionale di Portofino.

Today we are hiking the Sentiero dei Due Golfi, a pretty trail meandering through woods and along an Apennine mountain crest overlooking the Gulf of Paradise and Tigullio Gulf. When the trails in the park and in the nearby Cinque Terre to the south are as busy as a highway in the high tourist season, this is a quieter and lesser known route. The path starts in Ruta di Camogli and concludes in Santa Maria del Campo near Rapallo.

To get to Camogli we take the 7.20 a.m. direct train from Milan’s Central Station. We arrive at 9.49 a.m. and buy bus tickets (€1) at the station kiosk. Our first thought before boarding the bus to Ruta is focaccia.

At the pasticceria a few doors down from the station on the right, we queue with the local residents to buy a thin pastry version with melted stracchino cheese, still warm from the ovens. Coarse ground cornmeal adds flavor and texture. We down this salty treat across the street in the little square, Piazza Schiaffini.

We then stroll through narrow streets to the promenade along the seafront. Light bounces off the pastel-colored buildings huddled together in this once-upon-a-time fishing village. Camogli does not attract the rich and famous in sleek yachts like nearby Portofino. Tourists bask in the sleepy morning sun. Camoglini walk their dogs while children play on the stony beach.

We walk back to Piazza Schiaffini where the 73 bus to Ruta di Camogli stops. After a 20 minute climb above Camogli, the bus lets us off at Via XXV Aprile. There’s a lookout over the gulf. With our backs to the news stand, we cross the road and walk straight up XXV Aprile Street for 10 minutes. Behind a small stone church on the bend of the road is a sign for Via Caravaggio, the name of the trail. The path starts here.

As we hike through woods with the Uscio Valley on the left and the Golfo Paradiso on the right, we soon see double red “oh” signs. At the first fork, we keep right and after a few minutes see the “oo” circles. Occasionally, there are also signs marked “2 G,” the trail of two gulfs.

This is a lovely, easy walk. It’s the end of February so the woods are full of Reichenbachian violets (the family includes Bougainvillea), crocuses and the last of the yellow primroses. Paradise Gulf plays peek-a-boo and once onto the crest, we also look down on Tigullio Gulf and the city of Rapallo.

We hike to Passo Quattro Pini (489 meters), then on to Monte Orsena, also called Monte Caravaggio (627 meters). On top sits the Sanctuary of Caravaggio or the Sanctuary of the Virgin, as it is also known. It was built in 1727. Today we find a group of scouts picnicking under the portico.

Past the helicopter pad, we have lunch in the overgrown garden of a stone ruin with a view of the valley, Rapallo and Tigullio Gulf. Rosemary and oregano fill the air. Then we go straight down the path into the woods. In a clearing we meet a couple of trekkers in a dilemma.

“Which fork do we take?” Left, right, straight ahead? — there’s nothing marked.

Marino, my husband, explores the path on the right. “This one,” he shouts. “Two red dots over a long dash.”

Together we follow the clearly marked trail with our new companions who turn out to be from Camogli but have never hiked this route before. In about an hour, we reach a road and see the Gulf of Tigullio and Rapallo again. We follow the road and shortcuts paths signed with the two dots and a dash. Eventually, we cross a bridge over the A12 motorway. Then we come to Via San Tomasso and the ruins of San Tommaso monastery (1159), desecrated in 1582 (yes, they’re spelled differently).

We arrive at S. Maria del Campo and a road with the same name. Down the road to the right is a bar where we buy bus tickets (€1). The bus stops in front. In about 20 minutes, we reach Rapallo’s train station.

The bustling city spreads around Rapallo Gulf on the western shores of the Golfo del Tigullio. While 55 percent of the 30,000 inhabitants are Rapallini, 45 percent are Rapallesi, residents not originally from Rapallo. Many have holiday homes here. With its traffic and pace, it feels like a small Milan on the sea.

The Camoglini show us the Porta delle Saline, the only surviving city gate. We have ice cream opposite the seafront castle, built after the attacks (1549) of the Ottoman pirate, Dragut. Later, back on the train to Genoa, we say good-bye to our new friends.

— Information: Take direct trains from Milano with destination La Spezia, or change in Genova (Genoa); by car: Milano-Genoa and Via Aurelia (SP1) to Ruta di Camogli.