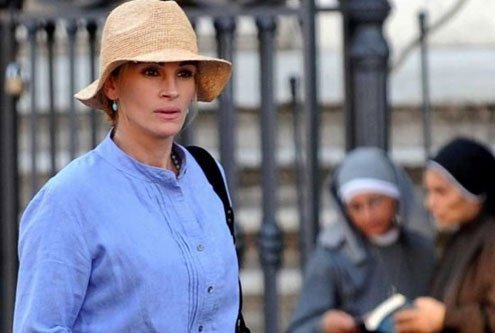 finally read “Eat Pray Love” by Elizabeth Gilbert. As a colonial fantasy about Italy, it is no better or worse than any other of its genre.

Yes, you heard that: Colonial Fantasy.

Gilbert and others like her — middle-aged American women with failed relationships — have more in common with the Foreign Legion volunteer or East India Company agent than you think. Both escape abroad to find adventure, self-knowledge, their man or their womanhood, and profit of some kind. Their experiences are not journeys of open-ended self- or cultural discovery but missions to find and appropriate something they already want or believe.

I read “Orientalism,” Edward Said’s theory of colonialism, long ago, but I recognize it all here: the colonizer’s sense of moral superiority, his sexualizing of the colonized culture and his use of its “otherness” to define himself and his own culture.

My gripe is not that the Italy Gilbert’s ilk depict is neither mine nor real (she lazes about Rome and eats the whole time). After all, realities are as numerous and various as we are.

My gripe is that everything leads back to the projected desire. Her reasoning is the circular kind beloved by conspiracy theorists who see plots everywhere because they’re looking for them.

Gilbert sought pleasure, so pleasure is what she found. “Rome is SEX,” she (celibate at the time) declares. All Roman men are handsome. Italian families are happy; Italian society is fine. All food is good and beautiful, even a simple lunch of egg and asparagus. Never mind that she could (and should) eat that way at home. Never mind that even in Italy out-of-season asparagus (it’s fall in the book) comes from somewhere else. But she bought it from an old lady at a market. That means it’s Italian and therefore pleasure. Or is it the other way around?

Taking is what colonial writers such as Gilbert do. They “take” Italy’s culture and history — its most significant natural resources — with the same singleness of purpose as colonists took African gold, Argentine grazing lands or Asian plantation labor.

Sadly, Italy’s poor management and lack of respect for the long-term viability of its cultural and historical gifts is not the only thing it that makes it amenable to Gilbert-like exploitation.

After all, Italy was a colony. And it is post colonial. For centuries, foreign powers invaded and collaborated with local elites to exploit it. Military intervention and 19th century ideas about the nation state created Italy, much the way they created other countries from colonies, Iraq for example. As a consequence, Italy has a weak national identity, which was imposed on disparate and derided regional and tribal cultures. “Sunny Tuscany” may be to Italy what African dance displays are for visiting diplomats: pastiches of nostalgia for lost and scattered customs mixed with modern fantasy.

Today, dreams of glorious pre-colonial, past-imperial times — including heroic Rome and Renaissance Florence — distract Italy from growing up and taking responsibility for its modern self. Separatist rhetoric, which divides North from South, rich fro poor, also influences Italy’s elections, just as it does in Lagos or Khartoum, though Italy still lacks the violent ingredient.

“Che male c’è?” readers may wonder. Isn’t the crime of Gilbert and others like her a victimless one?

Kenyan Nobel Peace Prize winner Wangari Maathai writing in “The Challenge for Africa” would disagree, especially if she knew that appearances in the foreign press are front page news in Italy. Substitute “Italians” for “Africans” in the following passage: “…Africans see these images … and internalize them. A dangerous and unfortunate psychological process ensues that subtly and perhaps unconsciously affirms to Africans their inability to be agents of their own destiny. Eventually it may destroy the sense of confidence they should and must have to make progress.“

Asking Gilbert to cut it out is probably as impossible as telling United Fruit to go home. The home market enjoys a product that, like a lottery ticket, lets them dream-the Italian dream (no surprise that Julia Roberts was cast as Gilbert in the Hollywood version of the book). Should we boycott Gilbert, “Under the Tuscan Sun” Mayes et al., like blood diamonds? Sure, up to point. But as Maathai suggests, self-image comes from within. Change begins with understanding. So, Italiani, leggete “Eat, Pray, Love”!