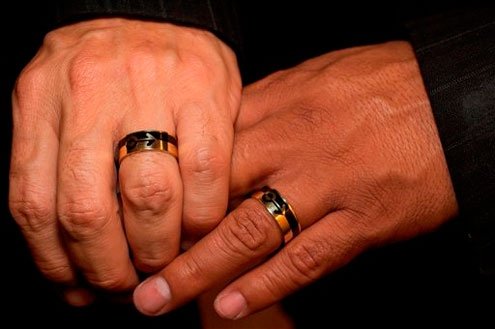 “Yes it was. The same church my mother and father got married in.”

Franco, our self-appointed defender of the institution of marriage, is a gay psychologist who might be described as a non-practicing Catholic.

On July 20, 2005, Canada became the fourth country in the world and the first in the Americas to legalize same-sex marriage nationwide, providing a gender-neutral definition of marriage. Alberto and I married in September 2005 after five years of living together and almost as many years involved in a trans-Atlantic romance. Our union has only our names; no husband-wife titles or roles; no instructions as to who does the cooking and who does the cleaning.

Our decision to legally marry came fairly easily, since we had already made the commitment. Leaving Canada for Italy, I put aside my job, car, and the possibility of building a career. Alberto had done everything humanly possible to have me here in Italy. Considering Italian bureaucracy and immigration laws, the effort was superhuman.

Our proposal wasn’t one for romance writing industry. One evening in Milan while out on the balcony for a smoke, I said: “Why don’t we get married?” To which Alberto replied, “Okay, why not?” I shrugged and said, “It’s our right, Use it or lose it.”

We told Alberto’s mother and she bought us a set of rings. Rings in our pockets, we headed for Canada in September to get hitched.

When we got back we had a reception at the local fake English pub with about 100 family and friends. Felice, an old friend, let us know Franco would attend but wouldn’t bring a gift, since to him it wasn’t a real marriage. “We want his presence, not his presents,” I told her.

Back on the “proposal” balcony, Alberto told me he never imagined getting married. “I had just accepted that I would spend the rest of my life single.”

He asked me if I felt differently now.

I thought for a moment. “I guess it’s the difference between renting and owning your home.”

Italy is now my home, even though only Canada recognizes our marital status.

For a number of years Alberto and I have occasionally gotten together with a small group of Canadians who live in Milan. At our previous meeting on Canada Day, July 1, someone announced that two of our compatriots, Eric and Cheryl, had just got engaged. We all toasted them and wished them the best.

Canadian Thanksgiving comes in October and this time we were the newlyweds. We settled down for a meal of turkey, mash potatoes and cranberries. The food devoured, it was almost time to go. With the exception of private congratulations from two friends, no one had said a word.

Alberto and I stood in a corner. We had finished our drinks. The organizer, a stout middle aged woman named Judith whose husband is Italian, stood up from her table and walked over to us wearing a large cat-like grin. Her tablemates watched in a conspicuously non-conspicuous way.

“So I hear you two just got married,” she announced loudly.

I smiled and held out my ring finger.

Her tablemates nudged each other and tittered. I had a flashback to those vicious high school games of inclusion and exclusion. I held my smile.

“You know Judith,” I replied, “I could ask you the same question, but your answer might give me nightmares.”

Many times I have felt proud of my fellow Canucks as defenders of peace and human rights at home and abroad, but this was not one of them. All too often, people like Franco and Judith feel compelled to impose morality, pass judgment and ridicule, ignoring the rights of others to live with dignity and respect. Thankfully, at least in Canada, their opinions and prejudices don’t deter the law, which puts gender aside and allows two people who love one another to marry.