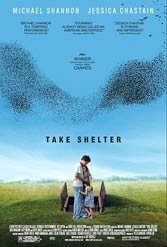 Here’s a film that’s true to an outstanding conceit: A blue-collar movie about dread, madness and the impending apocalypse. Curtis (Michael Shannon) is a 35-year-old driller and construction worker in the small town of Elyria, Ohio. A laconic but earnest man, he’s married to Samantha (Jessica Chastain) and the couple dotes on their small deaf daughter, Hannah.

Curtis’s mother was institutionalized decades ago for paranoid schizophrenia, but the detail hardly concerns the inarticulate Curtis until he begins having nightmares about swirling birds and coming storms. He thrashes through the night, wets his bed, fears what he doesn’t understand, and begins working on refurbishing the backyard tornado shelter. “I’m afraid something might be coming,” he says. “Something’s not right.” His wife is by turns bewildered, devoted, and angry, particularly when Curtis’ obsessions cost him his job and health care for Hannah. Urged against his will to attend a local town party, Curtis breaks down into a foaming rant: “There is a storm coming,” he roars. He sounds like the ghost of Jonathan Edwards.

Writer-director Jeff Nichols’ movie is a superlatively slow pas-de-deux with many kinds of abysses, that of madness, impairment, panic, and shamanism. It’s also an ode to marriage, since Samantha, while made wild by her husband’s obsessive distractions, never strays from the martial text, producing a kicker as tender as it is stunning.

If Lars von Trier’s end of days “Melancholia” was brimstone for the intellectual set, here’s the Middle America version, and it’s just as poignant, just as smart. Chastain is stalwart, in perfect tune with the simmering turbulence, but it is Shannon’s beautifully alarming portrayal of confusion that contains a kind of understated genius few actors know to attempt, let alone conjure.