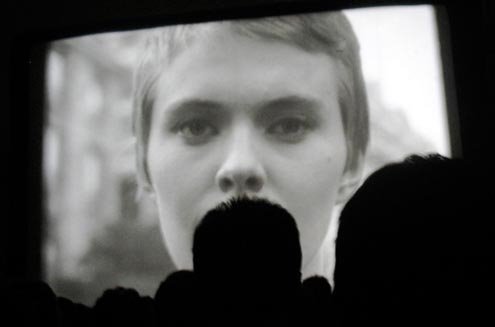 ean-Luc Godard’s À bout de soufflé (Breathless) is a je m’en fous movie about love, betrayal, gangsters, and points in between. It’s essential to modern cinematography for the way the nosy, freewheeling camera can’t and won’t leave the action alone, at times seeming to yank you around.

Watch it and you’ll see all that’s supple and anxious in modern movement: the straight, the jerky, and the nervous, all of it up close and bouncing around long before anyone had a hand-held camera to make things seem dubiously realer.

Paris gangster Michel Poiccard (twitchy Jean Paul Belmondo) is wedged in and out of his own story; same with flirt and would-be companion Patricia Franchini (the cool Jean Seberg). The camera’s unprecedented jumpiness (pulled in by Belmond’s hang-dog smoking) drained bath and water and brought on the French New Wave (Nouvelle Vague sounds better).

The story, however, is fairly conventional. Petty crook and Bogart romantic Michel falls for the wrong girl — a minimalist, short-coiffed American, no less. She not only doesn’t understand him, but actually, and perhaps inevitably, gets him killed — not that he wasn’t already thundering that way. In between, the bad guy is both bad and loving; cops hunt him down; car engines are gunned; and the Gitane gets its due as a French cultural icon (along with lips). Belmondo and Seberg are either irresistible or wooden, depending on the action. The problem is that Godard knows he’s making a movie, which leads him to trip over his own importance,

There’s still considerable debate about Michel’s dying final line (“C’est vraiment déguelasse“) — at least among Godard students — but “Life’s a bitch” will do, because then you die.

Speaking of interpretations, check out Dick Richards’ Raymond Chandler 1975 adaptation of Farewell, My Lovely, if for no other reason that the way it distills Robert Mitchum’s career, if in a bittersweet way. His Philip Marlowe is bemused, amused and drenched in a fog of 1940s smoke. He’s gravel-voiced and committedly resigned to living in the op netherworld (Mitchum was nearly 60 at the time). Mitchum, who trawls through California murders to get track down the requisite missing nightclub singer, compensates for the considerable (at times questionable) liberties screenwriter David Zelag Goodman took with Chandler’s text.

Charlotte Rampling, in her prime, is appropriately vampy as Helen Grayle. When Mitchum’s Marlow says, “She gave me a smile I could feel in my hip pocket,” you know he lives in his head, an existential detective who invents an underworld world to wait on his fantasies.

David Mamet, a lover of the underworld, did something unusual in “State and Main,” as close to comedy as he’s ever gotten. A film troupe invades a rural Maine town, wreaking modest, culture-clash havoc and upsetting the locals.

The problem is Mamet working to be non-Mamet-like. He badly wants to deliver the wry goods but the material doesn’t leave much playroom — aside from a wide-eyed town and bored stars.

In the end, Mamet tries merging small-town parody (think “The Andy Griffin Show”) with ensemble Hollywood satire but comes up mostly with one-liners as in, “If your memory was as long as your dick, you’d be in good shape.” Still, with a cast that also includes Rebecca Pidgeon, Charles Durning, and Patti LuPone the movie’s IQ is sweet and high.