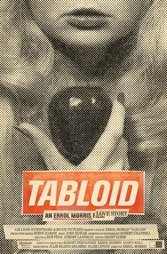 Documentarian Errol Morris’ greatest gift is in the way he encourages his “specimens,” famous or unknown, to perform on camera. He needs few props, tricks or musical accelerants. His tightly focused morality play stories are gripping because the central characters can’t or won’t stop confessing, much taken in by the sounds of their voices.

That is nowhere more evident (and alluring) than in “Tabloid,” the “Ripley’s Believe It or Not” tale of a former Wyoming beauty queen named Joyce McKinney who in 1978 fell madly in love with a Mormon named Kirk Anderson, eventually flying to England to “kidnap” him after he allegedly slipped out on a relationship she was sure would lead to marriage and children. To McKinney, he’d been abducted by a nefarious cult and her task was to woo him away — albeit with the help of gun, handcuffs, and “honeymoon” sex. The public result was British tabloid headlines about a “Manacled Mormon” forced to have sex with a lunatic American.

On the face of it, the story is about one woman’s obsession, and the equal-and-opposite British tabloid fascination with all things eccentric and licentious. McKinney’s escapades (she was briefly imprisoned) swiftly ignited a text-and-picture war between the Daily Express and the Daily Mirror, then among England’s most potent tube stop dailies. More insidious is the film’s quietly corrosive 1970s portrait of Mormonism.

Morris lets McKinney tell her fairy-tale like story, which she does with affected conviction. She was, she says, an “incurable romantic” who chased down her Mormon man for love alone (never mind her L.A. past as a bondage hooker). She’s chatty, charming, and very much in a world of her own (the idea that a woman could rape a man, which she was charged with doing, is, she says, “like putting a marshmallow into a parking meter…”) Girding the story is commentary from Express journalist Peter Tory (who with affection calls her “barking mad”) and Mirror photographer Kent Gavin, who is far less charitable.

When the tabloid feeding frenzy finally abated, McKinney retreated from celebrity into agoraphobia, choosing a dog named “Booger” over men. But “Booger” dies and McKinney’s incurably romantic side resurfaces, this time in seeking to clone her dead dog. Which she does. Leave it Morris to strike gold in even the strangest of hills.