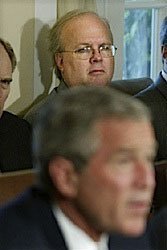 Watergate chased out Richard Nixon in 1974, two years into his second term.

No two-term president in 40 years has escaped the curse.

With Scooter Libby out and Karl Rove sweating, George W. Bush has his very own T2 mini-crises.

Arrogance is the pulse of these messes — a yielding to the vindictive urge to discredit critics. Second-term presidents and their lieutenants often get sloppy. Nixon thought he owned government; he didn’t. Reagan (with John Poindexter and Oliver North playing brokers) and Clinton (with Lewinski stripping) also ran amok.

It’s hubris for sure, but that’s the territory of the U.S. presidency.

As it is the territory of those who deplore its sitting occupant.

Second terms are a field day for partisan warriors. They can find institutional containers for their rage. Special prosecutors are perfect.

Again, history speaks to the point.

The liberal press hammered away at the man it called “Tricky Dick.” Watergate (which included the firing of a special prosecutor) only tipped weighted scales.

Reagan’s remoteness from his brain trust ended with Poindexter out and North making patriotic noises before Congress. The deceit was theirs, they insisted. And took the fall.

So did Clinton, who came an inch from impeachment, and, far worse, gave Christian reactionaries the daylight Newt Gingrich couldn’t find.

T2 crises have always had a fair share of fallout.

Clinton gouged Democrats. Al Gore lost focus, looked back in anger, and W. was on his way.

The current T2 scandal holds a mirror to the fundamental disagreements of the day.

There’s Rove, the man 2002 Bush called “the architect” and others labeled Satan’s apprentice.

There’s what former Colin Powell aide Lawrence Wilkerson (a retired Army colonel) recently called the “Cheney-Rumsfeld cabal.” What he saw in T1, he said, “was a case that I have never seen in my studies of aberration, bastardization” and “perturbations.” That’s a clunky way of saying the kennel was remorseless and big dogs ruled.

But nailing Rove, Bush’s ever-evolving piece of human software, would slash at the cabal’s belly.

Watergate and its cover-up revealed Nixon at his despicable worst. Iran-Contra made Reagan look foolish. Lewinski evidenced a seamy side of Clinton many knew of but no on talked about.

“I did not have sexual relations with that woman,” said Clinton.

But Nixon was, and Clinton did.

Reasonable doubt. There’s now reasonable doubt that Bush’s patriotic proselytizing in the wake of September 11 was either informed or noble.

If Democrats can keep at this, and they will; if conservatives start snarling, and they will — suffice to say Republican managers will get a workout. A modified Clinton-Gore scenario in which the Bush legacy hinders a Republican candidate is no longer unthinkable.

A presidency that asserts redemptive righteousness and trivializes shortcomings is always at risk. Yet Bush, with September 11 as a fallback, seemed immune to scandal.

But that’s not the way T2 works.