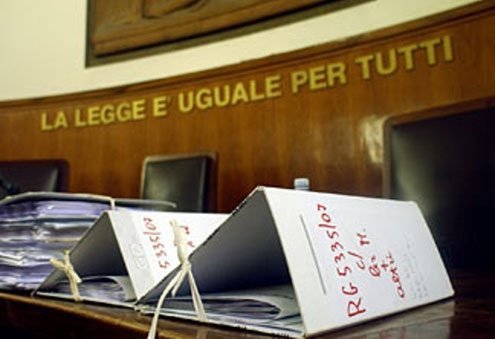 Italian law may be equal for all, but the road there can take too long.
T

he Italian judicial system is an interesting one. Exasperating is one way to describe it. Arduous is another. Never ending is the most common. It’s also a system that has recently found itself in the spotlight.

The trials of Amanda Knox and then-boyfriend Raffaele Sollecito over the 2007 murder of Meredith Kercher and the legal travails besetting former Italian Prime Minister Silvio Berlusconi have filled column inches both inside Italy and out. The reason for this, at least in part, is that an Italian court ruling doesn’t bring certainty.

Take the Knox case. On Oct. 3, 2011, the Knox and Sollecito had their 2009 murder conviction overturned on appeal. “It’s one of the many failings of Italian justice,” Guardian journalist Tobias Jones wrote at the time, “that it never delivers conclusive, door-slamming certainty. What usually happens is that the door is left wide open to take the case to the next level, first to appeal and then to the cassazione, the supreme court.”

Jones was chillingly prescient. In March 2013, Italy’s Court of Cassation accepted a retrial request from prosecutors and Kercher family lawyers, who claimed the appeals ruling was “contradictory and illogical.” Critics of the way the case was handled have returned to their old ways, pointing out a stream of flaws in the initial investigation. For some, Knox and Sollecito are two innocents who happened to be at the wrong place at the wrong time and paid with jail time.

Disparaging the Italian legal system isn’t just a foreign sport. After the latest Knox verdict, even the Turin daily La Stampa was outraged. An editorial said the Knox retrial ruling “leaves a bitter taste in the mouth.” At issue, it added, was “the efficiency of our judicial system and the capacity of our judges. There are … too many murder cases in which [judges] have been incapable of giving convincing responses….”

Not just sensational cases catch media headlines. Type Italian judiciary into a Google search in the UK and out come hundreds of articles about a “dysfunctional,” carnival-like system seen as creaky, antiquated, and often impossible to assess rationally.

Take divorce, which in most EU states and North America normally takes about a year. In Italy, which has yet to shed its Catholic legacy, a three-year legal separation period comes before divorce is legally allowed, leaving the door open for reconciliation. If one spouse resists a definitive breakup, the process can drag on for years. As a result, some Italians have begun going abroad to speed things up.

In 2011, the New York Times reported on Italians flying to Romania, an EU state, to get around the interminably slow (and costly) Italian system. On average, the Romanian paperwork takes less than a year. It can seem worth the trek.

Then there’s Berlusconi. In June, a Milan court convicted him of paying an underage dancer nicknamed Ruby for sex, and also for abuse of office, sentencing him to seven years in jail and a lifetime ban on holding public office. Interestingly, the state prosecutor and the three judges were all women. The verdict produced predictably sensational headlines, most of which dredged up old hyperbole about “shock waves” in Italy.

But those who read deeper saw a different legal picture. Berlusconi, who turns 77 in September, still has two major legal cards to play. He can and will appeal, a process that may take years. If the appeal fails, he can take his case to the Cassation Court. As a result, he’s unlikely to serve jail time or even see his political role diminished (all the more so since his People of Freedom Party immediately rallied around him, putting the fragile new government of Prime Minister Enrico Letta at risk).

For outsiders, sentences that have little or no immediate binding impact are bewildering.

In a recent report, the British news agency Reuters noted the surreal side of the country’s legal shortcomings. “The average time to settle a civil case in Italy is more than seven years and a criminal case nearly five,” it wrote. “And except in the most serious criminal cases, those found guilty will not be jailed until they have exhausted the appeal process.”

Petty crime further slows the system. In Italy, “falsifying a one euro ($1.33) bus ticket is a criminal offence eligible for a full trial and two appeals that would cost the state many thousands of euros.” The situation, said Reuters, “reduces citizens to despair and has senior judges tearing out their hair.” It also keeps potential investors from getting anywhere near Italy.

Both Italy’s judicial system and equally burdensome electoral system are in urgent need of reform. But the enormity of the task seems to defeat official efforts, since few governments serve long enough to push through a legislative agenda. Ironically, only Berlusconi served a full six-year term, from 2001 to 2007, and his reforms were mostly self-centered.

In 2011, Paola Severino, justice minister under Prime Minister Mario Monti, candidly admitted legal reform was “beyond our strength and possibilities.” The government, she said, lacked time.

Even Italian governments that do make such pledges usually end up sidetracked, all the more so in times of economic woe. For now, the idea of “door-slamming certainty” seems out of Italy’s grasp.